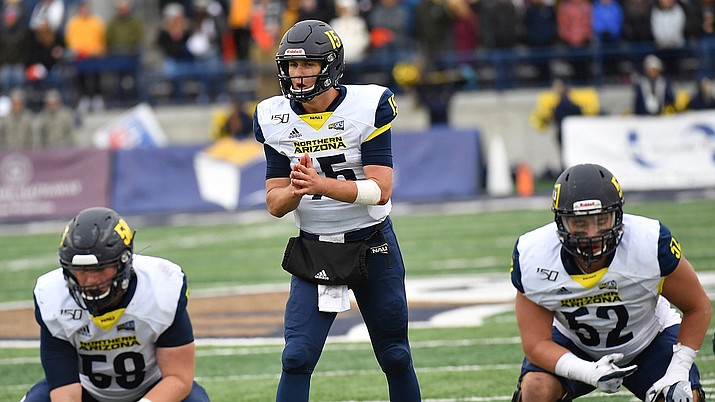 NAU senior Case Cookus has been named one of the four finalists for the FCS’s most outstanding offensive player award. Photo courtesy NAU.

NAU’s Cookus Named as finalist for the Walter Payton Award

FLAGSTAFF – Northern Arizona University senior quarterback Case Cookus has been named as one of four finalists for the 2019 STATS FCS Walter Payton Award, presented annually to the most outstanding offensive player in NCAA FCS Football.

Each of the players finished among the top four vote-getters from the 26 finalists who have been in the running for the Heisman of the FCS level.

The 4,114 passing yards marked the 10th season with 4,000 or more aerial yards by a player in Big Sky history.

In addition, Cookus became the Lumberjacks’ career leader in passing yards (12,082), passing touchdowns (105) and total offense (12,314) in 2019. The 105 touchdown passes also rank as the second-highest career total in Big Sky Conference annals and his 12,082 passing yards sit as the fourth-best total in league history.

In 2019, Cookus had nine 300-plus yard passing efforts and a pair of 400-yard performances. He tossed multiple touchdowns in nine games - with five games of three or more scoring tosses and four contests with at least four touchdown passes.

Cookus would be the second player in NAU history to take home the prestigious national honor as former Lumberjack standout running back Archie Amerson was named as the recipient of the Walter Payton Award in 1996.

The Payton Award, named for the legendary College and Pro Football Hall of Fame running back and presented since 1987, will be handed out at the STATS FCS Awards Banquet Jan. 10 in Frisco, Texas – on the eve of the national championship game.

Cookus has been at the national banquet previously, winning the 2015 Jerry Rice Award as the national freshman of the year.

A national panel of 156 sports information and media relations directors, broadcasters, writers and other dignitaries voted on the Payton Award following the regular season. Voters selected a Top 5 on their ballot.

FLAGSTAFF – Northern Arizona University junior place kicker Luis Aguilar has been named as one of 10 finalists for the Fred Mitchell Award, which is presented annually to the nation’s top place-kicker in FCS, Division II, Division III, NAIA and NJCAA football. 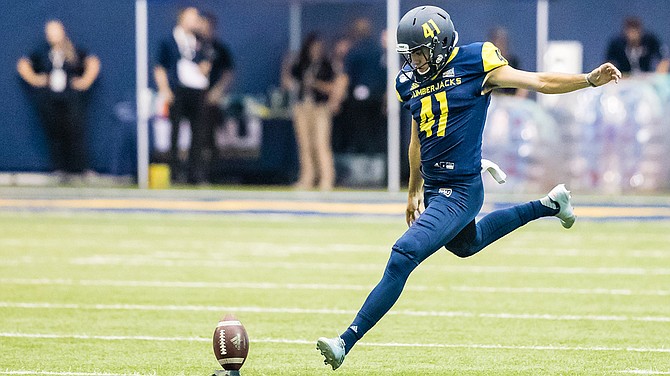 NAU senior junior Luis Aguilar has been named as one of 10 finalists for the Fred Mitchell Award, which is presented annually to the nation’s top place-kicker in FCS, Division II, Division III, NAIA and NJCAA football. Photo courtesy NAU.

Aguilar enjoyed a breakout season in 2019, which saw him establish himself as one of the most potent kicking weapons in all of college football. He ranked third nationally among all FCS kickers by connecting on 88.8 percent of his field goal attempts.

The junior made 22-of-25 attempts on the season – with only one miss from under 50 yards. He nailed kicks from 57 and 54 yards this season – the blast from 57-yards out was the longest field goal made by any FCS player in 2019.

Aguilar was also perfect on all 52 of his extra-point attempts and led the nation with a total of 61 kickoff that went for touchbacks.

In addition, Aguilar was third among FCS national leaders and led the Big Sky Conference with 1.83 field goals per game and was ninth in the nation in scoring with 9.8 point per game average.

Aguilar was previously honored as a 2019 All-Big Sky First Team choice and was recognized as the Big Sky Special Teams Player of the Week twice this past season.

The Nogales, Ariz., native would become the first NAU player to receive the honor after the trophy was established in 2009.

Aguilar entered the 2019 campaign with just four made field goals in his initial 22 career games, with his longest make coming from 38 yards.