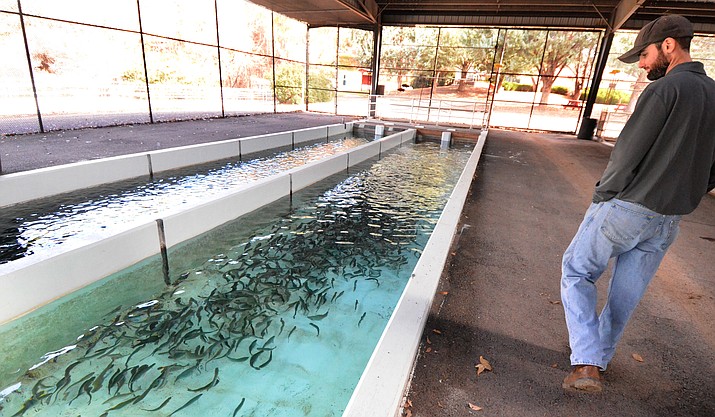 Rainbow trout can be seen in one of the raceways at the Page Springs Hatchery in Cornville on Wednesday as Fish Culturist Matt Lyons walks around the pools. A sign outside announces that the raceways are closed to the public. An AZGFD spokesman said rainbow trout that were in the Page Springs Hatchery raceways where the New Zealand mudsnails were detected were transferred to the Willow Beach National Fish Hatchery for eventual stocking into mudsnail-positive waters VVN/Vyto Starinskas 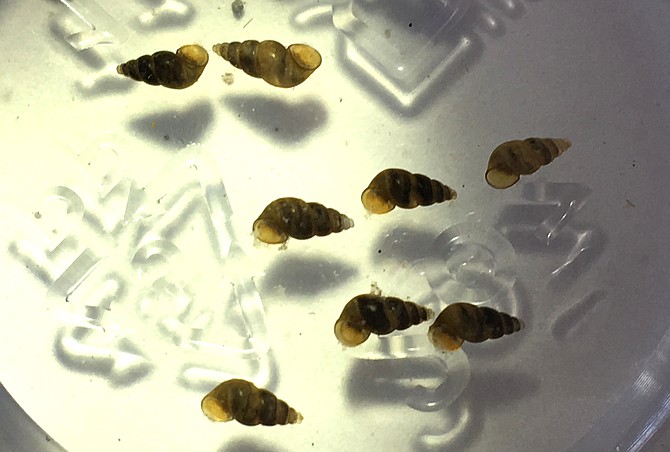 Even though the stockings from Page Springs have been halted, Game and Fish is purchasing fish from out-of-state vendors to stock most waters, he said in an email Wednesday.

This includes the lagoons at Dead Horse Ranch State Park in Cottonwood.

“The only streams that were due to be stocked, and were not, are West Clear Creek and Wet Beaver Creek,” Walter said.

AZGFD believes wildlife may have introduced the mudsnails from Oak Creek to the Page Springs Fish Hatchery and is doing surveys to determine the source. “At this time, no adults have been detected in Oak Creek or other nearby locations,” he continued.

“We are surveying many places around the Verde Valley and across the state for snails.  No snails have been found to date,” he said.

“There is currently no way to completely eradicate New Zealand mudsnails from Oak Creek or anywhere else we may find them in wild situations.”

The snails do not typically attach to fish, however in places were snails are plentiful, trout will eat snails, Walter said.  New Zealand mudsnails can pass through the digestive system of fish unharmed.

“Stockings from Page Springs will resume as soon as AZGFD implements a process to ensure New Zealand mudsnails are not transported through stockings,” Walter said.

In an email Thursday, Walter said he has not received any updates on whether their treatments at the Page Springs Hatchery are working yet.

The New Zealand mudsnail is an invasive snail that is “ovoviviparous (live bearing) and parthenogenic (reproduces asexually),” Walter wrote.

“These snails were first found in Arizona in 2002 below Lake Powell in Lees Ferry, and then progressively moved downstream through the Grand Canyon and into Lake Mead and Lake Mohave. Since 2008, they have been known to inhabit the Willow Beach National Fish Hatchery.”

The rainbow trout at the Page Springs Hatchery where the New Zealand mudsnails were detected were transferred to the Willow Beach National Fish Hatchery for eventual stocking into mudsnail-positive waters, Walter said.

AZGFD said it is testing more areas for the mudsnails and continuing a treatment in an effort to eradicate the mudsnails from the facility.