'Nobody Is Above the Law' rallies set for Cottonwood, Sedona
MoveOn.org nationwide event demands Trump be impeached and removed from office 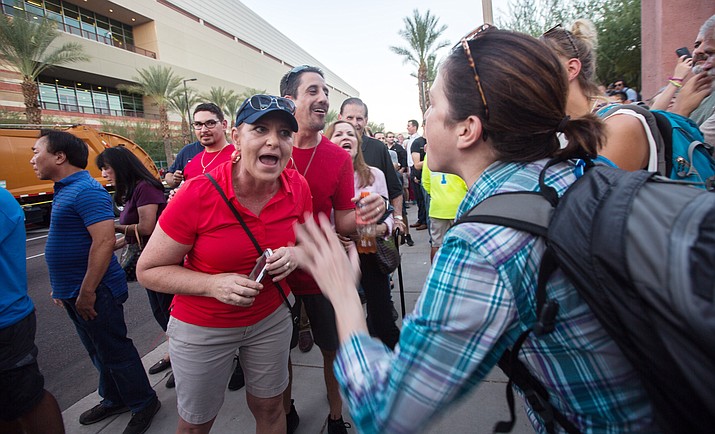 Tensions flared on both sides of the political spectrum during President Donald Trump's campaign-style rally at the Phoenix Convention Center in 2017. Two events encouraging impeachment of Trump are planned for Tuesday in the Verde Valley are part of a nationwide, coordinated protest. VVN file photo

VERDE VALLEY -- Two events planned for Tuesday in the Verde Valley are part of a nationwide, coordinated protest.

MoveOn.org's "Nobody Is Above the Law" rally is intended to urge members of Congress to vote to impeach President Trump. The rallies are set to take place one day ahead of a planned U.S. House vote on articles of impeachment and well in advance of an anticipated Senate impeachment trial.

It isn't clear from MoveOn.org whether the rallies will be held on private property or public right-of-way, whether any of the events are locally permitted or whether any streets will be closed.

The MoveOn.org contact for the Sedona event, Toby Friedman, said she expects a large group Tuesday -- beyond the usual group that gathers at the intersection with signs.

Neither Cottonwood nor Sedona police had been contacted by any groups or individuals planning to march or gather at those times and sites. Sedona Police Chief Charles Husted said people have gathered at Coffee Pot Drive and 89A with political signage in the past, but he didn't know if it’s the same organizers.

The website says the event is meant to "part of a massive, grassroots effort to ensure Congress holds Donald Trump accountable for using military aid to pressure Ukraine to interfere in our 2020 elections."

Encouraging both of Arizona's senators to vote to impeach Trump is part of the rally's aim.

The site says "attendees will rally along the street and will be holding signs while using #NotAboveTheLaw to engage communities on social media."

Information about other events throughout the state, including ones in Flagstaff and Prescott, can be found at Impeach.org.