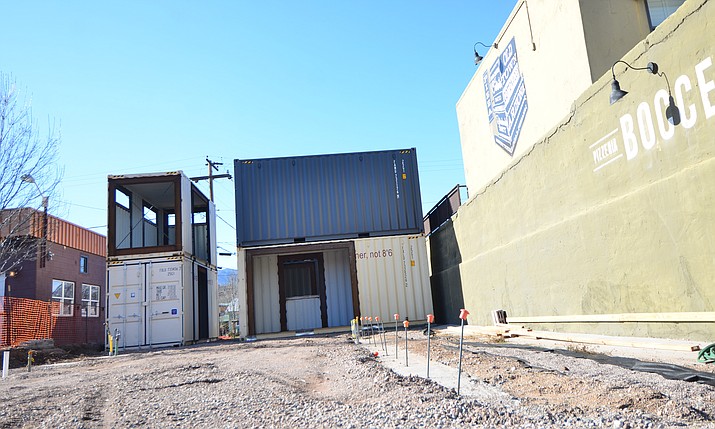 Six cargo containers sit next to Bocci in Cottonwood and will become an extension of the popular pizza establishment with “bar strata” food. VVN/Vyto Starinskas

JEROME -- Eric and Michelle Jurisin have bought Jerome’s Mile High Grill and Inn; and its lucky “number seven” for the business-owning couple.

That’s seven restaurants and two hotels since they opened Haunted Hamburger in Jerome, in 1994, which was the beginning of the successful Haunted Group that now employs more than 280 people between Jerome and Cottonwood.

Eric sat in the Mile High Grill’s huge picture window on Tuesday, looked out at an amazing view of the Sedona Red Rocks framed by two Jerome parking kiosks, and discussed his latest acquisition.

He said he wasn’t looking to buy another restaurant, swore the last time he opened a business it was the last one, and he says seven is now enough.

The Mile High is “in the Haunted Hamburger’s front yard,” Jurisin said. “The posts for our deck sit on the Mile High’s retaining wall,” he pointed out. “We share a pretty important property line.”

“I don’t know if we need to own three restaurants in Jerome, but now we do.”

As Eric spoke in the dining room which he said he will close down and renovate, his son Eric was working in the kitchen.

Jurisin said his son is 20-years old, is a culinary school graduate and has experience working in 10 different restaurants. His son will be at the Mile High for now and will be a big part of the re-launch, Jurisin said.

After the renovations, he plans to continue to serve breakfast, lunch, and will add dinner to the menu.

He said the dinner menu will be “fine dining,” and he hopes to bring evening life back to the Jerome restaurant scene

“It (the Mile High Grill) was the first restaurant Michelle and I had ever eaten at when it was the Candy Kitchen a million years ago,” he said.

Jurisin said even though he had no plans to open or buy any new restaurants, but they are in the middle of another project at the popular Bocce Restaurant in Old Town.

He described it has as bar strata - street food, and Michelle got the idea in Boston, he said.

Bocce customers will be able to dine in large cargo containers and walk up and get food at an outdoor counter with a street fair and food-truck style atmosphere.

It will have a separate menu from Bocce, but it will be part of the same restaurant. It will serve appetizers and a space for private dinners, gelato and foods you would find in Italy he said

The Mile High building in Jerome will be shutting down for renovation “sometime in the near future,” he said.

The building was built in 1899 and was built as luxury offices and high-end retail. “We’re kind of excited to bring it back to its glory days” and towards its historic roots.

Jurisin said he will reduce to six hotel rooms from the current seven rooms. He will offer the same “staycation” packages he offers at the Tavern Inn in Cottonwood which combines rooms with hiking, kayaking and wine tasting.

He said the occupancy rates are higher for his hotel in Cottonwood and hopes to improve that in Jerome. “We’re seven restaurants and two hotels,” he said.

Jurisin said he got a call from Michelle about the Mile High and 30 days later, they owned the restaurant, he said.

“Now you have to figure out what to do,” referring to improving business for the 16 employees and 100-year-old building.

He looked out at their new restaurant’s interior and he said they have some great plans.

“Our goal is maybe to do more fine dining,” he said, especially in the evenings. “This will probably be the first restaurant where we take reservations.” It’s not convenient in the other buildings.