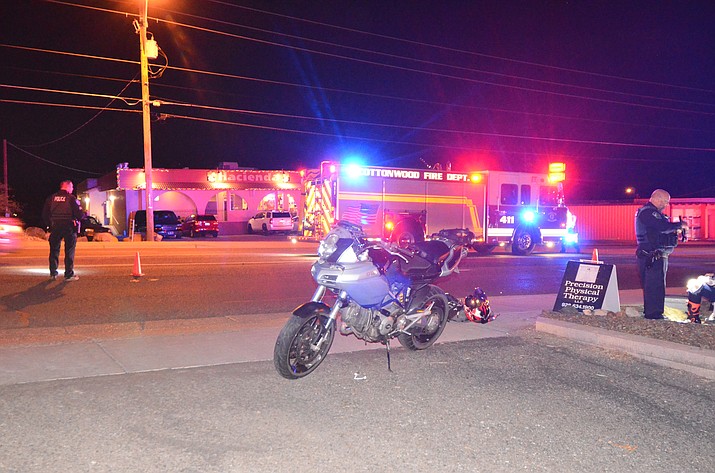 Cottonwood police at the scene of a motorcycle and pedestrian accident Friday night in Cottonwood. VVN/Vyto Starinskas

The 63-year-old pedestrian struck by a 25-year-old motorcyclist Friday evening on State Route 89A in Cottonwood is listed in stable condition at the Flagstaff Medical Center, according to a press release by Cottonwood Police Sgt. Monica Kuhlt on Monday.

“The pedestrian was not crossing in a crosswalk and the driving behavior of the motorcyclist appears to be a contributing factor,” Kuhlt said.

The investigation is being sent to the Yavapai County Attorney’s Office for review, she added.

“It appears, based on witnesses and a dash camera capturing the incident that two motorcyclists were traveling westbound on State Route 89A behind some vehicles,” Kuhlt said.

“One of the motorcyclists, a 25-year-old Cottonwood resident accelerated his speed, passed two vehicles traveling in the lanes in front of him by riding between their vehicles and then struck the 63-year-old male pedestrian who has an address out of Flagstaff,” Kuhlt said.

Responding firemen and EMTs quickly treated and loaded the pedestrian off the street into an ambulance to be transported by helicopter to Flagstaff. The motorcycle rider sat near the curb talking to police and his bike was parked upright on the sidewalk.

Cottonwood police Friday night said they were going to confiscate the motorcycle from the scene.