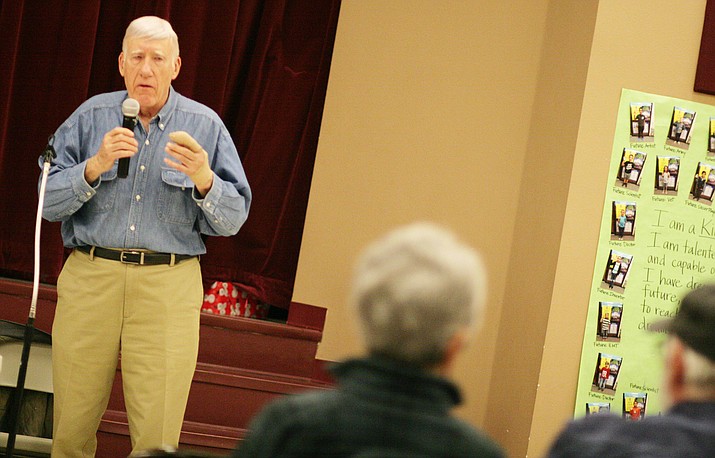 Larry Cepek, engineer and agent for Primrose Peaks Estates, held a public meeting Monday to find out how the public felt about a change in entrance to the proposed development. VVN/Bill Helm

RIMROCK – Water supply issues. Increased traffic. Inadequate road infrastructure. These are some of the concerns Rimrock residents shared with the engineer of a 302-unit housing project proposed in Rimrock.

But comments and concerns were limited to the suggested entrance location change from Bice Road to Brocket Ranch Road, according to Cepek’s Nov. 27 letter to property owners within 1,000 feet of the project boundaries.

For many who spoke to Cepek on Monday, their concerns don’t change with a new entrance to the build site.

Janet Aniol, president of the Beaver Creek Community Association, said last week she expected the community’s residents would tell Cepek that they were “overwhelmingly opposed to the potential project.”

BCCA Treasurer Bob Burke stated from a letter that Aniol wrote that the association cannot support Cepek’s zoning map change request “which does not comply with our community plan.”

“The lack of road infrastructure in Beaver Creek, including the insufficient highway interchange which could support such a project makes it particularly worrisome,” Burke read to Cepek. “The change of entrance to Brocket Ranch Road does not change the volume of traffic.”

For Rimrock resident James Gunter, the additional homes Cepek referred to as affordable housing are a threat to local economy, as well as safety.

“I don’t want to have to bring my gun just to go grocery shopping.”

Questions without answers is how Rimrock resident Bill Hancock described Monday’s meeting, “an exercise in frustration” is what he called it.

“Nobody wants this project to happen,” Hancock said.

The Dec. 16 public meeting was a requirement before Yavapai County can consider an application filed by Rimrock Partners to have the land rezoned from RS-70 to a Planned Area Development – PAD.

RS-70 is a single-family residential zone with a minimum 70,000-square-feet lot area.

Located northeast of Bice Road less than one mile from the McGuireville/Cornville Road exit off I-17, Primrose Peaks Estates would include 64 studio and 64 one-bedroom apartments, 102 two-bedroom and 72 three-bedroom townhomes.

Cepek said Monday that he hoped the county’s Planning and Zoning Commission would consider his rezoning request in February.