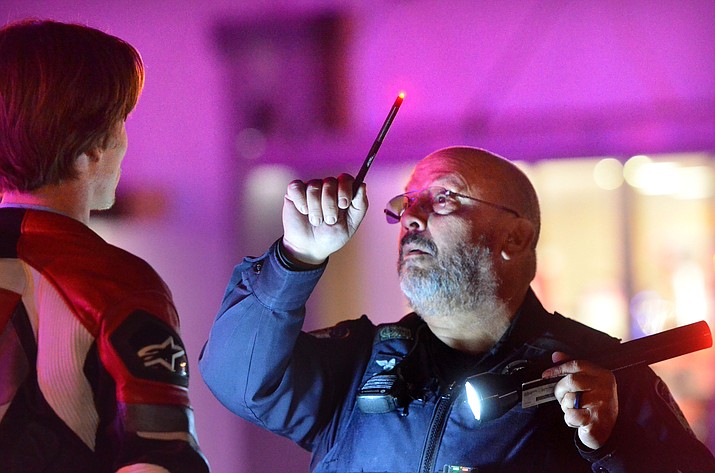 CLARKDALE -- It’s no secret when the Verde Valley DUI Task Force is out looking for drunk drivers.

There was plenty of warning before when eight police cruisers patrolled the town of Clarkdale for eight hours Friday night.

Warnings were put out on social media, in the newspaper and the DUI Task Force Recreation Vehicle was beaming its emergency lights in the Number 1 Food Store parking lot during the saturation patrols that lasted from 6 p.m. to 2 a.m.

On Saturday night, the same RV lit-up the sky in the Walmart parking lot as the Task Force patrolled Cottonwood.

Three police volunteers waited inside the parked RV with an Intoxilyzer machine to test motorists suspected of drunk driving. They are brought to the RV which was modified into a police command-unit for the Cottonwood Police Department.

Drivers suspected of using other drugs are taken directly to the police department to be tested by one of the Cottonwood Police officers qualified in phlebotomy training, explained Cottonwood Police Officer Roger Scarim.

In addition to the Cottonwood Police Department, participating agencies are from the Sedona, Yavapai-Apache Tribal, Clarkdale, Jerome police departments; and the Camp Verde Marshal’s Office, Yavapai County Sheriff’s Office and the Arizona Department of Public Safety.

“We pick a different area and saturate that,” said Scarim. This may include Clarkdale one night and Camp Verde or Sedona another night.

The police don’t use roadblocks or checkpoints, he said. “Basically, we do what we do normally, we drive around looking for traffic violations – looking for cues of impaired driving.” This can include weaving or making wide turns, issues such as that, he said.

The DUI Holiday Task Force Deployments are sponsored by the Arizona Governor’s Office of Highway Safety.

This is a statewide effort to make our streets and highways safer by removing drunk and drugged drivers, explained Monica Kuhlt, Cottonwood police spokesman.

“Year round, and particularly this holiday season, we urge motorists to plan accordingly with the abundance of alternative ride-sharing services, designated drivers and the continued awareness of drinking responsibly. Everyone plays a significant role in this important priority,” said Cottonwood Police Chief, Steve Gesell.

According to the National Highway Traffic Safety Administration, 10,511 people died as a result of drunk-driving crashes in 2018, according to Kuhlt’s press release.