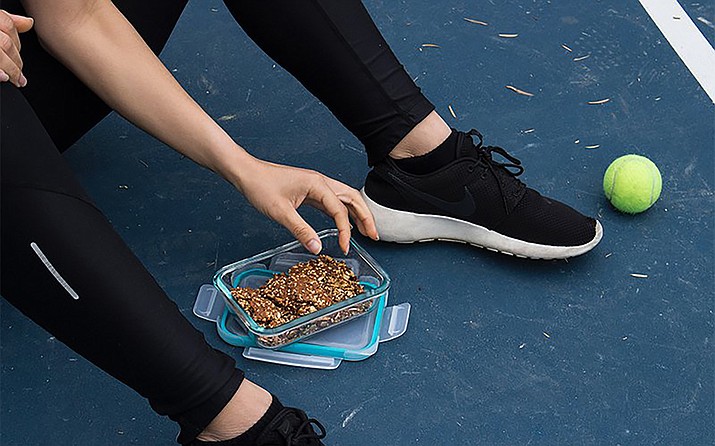 The holiday season is often the time of year athletes have to choose between indulging in gingerbread or hitting the gym. (Photo by Elsa Olsson/Creative Commons)

LOS ANGELES – Between the sumptuous eats and endless sweets, the holiday season can turn into one long cheat day.

Motivation to hit the gym can lag when it’s the perfect season to pull on a sweater and plant roots indoors. But athletes who train hard all year have to stay trim and resist the temptation to pack on those extra holiday calories.

Glenn Lyman, who has been a chef to Olympians, including swimmer Ryan Lochte, and such pro athletes as NBA star LeBron James, holds his athletes accountable even when holiday temptations arise.

“My mantra is ‘Eat like you mean it,’ and that means that all year long, you’re eating right, you’re doing the right things, you’re putting the good fuel in your body,” Lyman said. “You’re concentrated on lean protein, complex carbohydrates, leafy greens, healthy fats – everything that’s going to enable you to be a peak performer.”

Fueling your body as an athlete during the holiday season all comes down to one thing: balance.

Retired Olympic sprinter and bobsledder Craig Pickering knows the level of commitment it takes to stay accountable during the holiday season.

“I think the key thing to understand is that it’s OK to celebrate the holidays, but it’s not an excuse to go crazy,” Pickering said. “It’s about finding the right balance for that person, which will be influenced by things like when the next competition is.”

Finding the right balance doesn’t mean you have to avoid all the gingerbread cookies, cheese logs, Christmas fudge and spiked eggnog.

“I’d suggest that athletes limit their alcohol intake where possible to moderate amounts, somewhat infrequently, and ensure they consume adequate protein, which will assist in controlling their appetite,” Pickering said.

“It’s not the worst thing in the world if you’re hungry and you’ve been craving that sweet potato casserole and you want to dive into it,” said Joshua Stolar, an executive director for The Sport Medicine and Science Council of Manitoba, a group of sports-science providers organized to meet the needs of the Canadian city’s sports, recreation and fitness communities.

“One bad meal or one bad workout doesn’t mean you throw the next two to three weeks out the window. Try to be conscious of making sure you’re out and about, being active, stretching and eating properly to the best of your ability,” Stolar said.

When it comes to the temptation to eat that casserole you’ve been craving or that batch of cookies you’ve smelled baking, it’s important to focus on the big picture.

“You’re doing everything with a mission for game day,” Lyman said.

Many athletes still are competing during the holidays, he said, “so they’re not going to sit down and have extra mac ‘n’ cheese, gravy and fried chicken and everything because they have to be ready.”

Focusing on the big picture relies on the determination and self-discipline athletes have to want to be the best and feel the best, even when they get some down time at home during the holidays.

“I think the commitment usually when they’re home, they don’t have a lot of structure anymore, there’s just a lot of readily available food and they’re not feeling motivated they can sleep in they can stay on the couch all day if they want to,” Stolar said.

Many professional athletes who live away from home go back to visit family during the holidays and often face changes in their daily regimen.

“You’re not going to have the options readily available that you do at home, so that’s where the temptations will come in,” Lyman said.

As an athlete at any level it’s important to enjoy the holidays while still holding yourself accountable, even when the temptations are high.

“You have to look in the mirror, I can’t motivate anybody, you can only be self-motivated, you have to motivate yourself to be the best that you can be,” Lyman said. “Is what you’re eating right now the best thing for your body – not just for today but for your future?”

Eating well, staying well for the holidays
<CENTER><B>Letters to the Editor</b></center>
Weight, Weight, Don't Tell Me!!!
Are You Confident?
Coach of the year Moncibaez takes over Mingus X country
Event Calendar