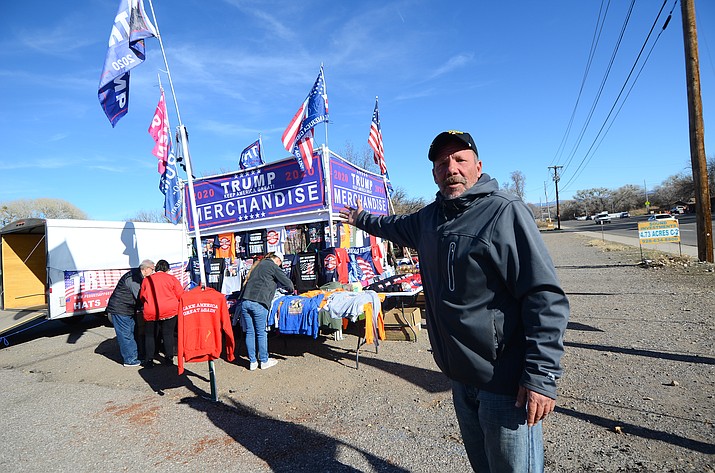 Steve Goodman has set up a Trump merchandise stand in Cottonwood for a week and business is “excellent.” VVN/Vyto Starinskas

COTTONWOOD -- It was just another day at the office Wednesday for Steve Goodman, even as the U.S. House was voting on the Articles of Impeachment against President Donald Trump.

The Boise, Idaho, resident set up his Trump merchandise stand at the Verde Hay Market parking area and was selling items to motorists passing by on State Route 89a.

He once lived in Mesa and Flagstaff and is familiar with Arizona, he said, and chose Cottonwood to sell his wares because Yavapai County voted red in the last election. He said he does his research before coming into an area.

Business is “excellent” in Cottonwood, he said, where he is selling everything from T-shirts, bobblehead dolls, banners and Make America Great Again hats.

He said he has been traveling the country with his stand and has been to 48 Trump rallies. Goodman said the backing and support for the president is at an all-time high in the United States.

The stand will be in Cottonwood until Sunday evening, he said, until he moves on home for Christmas.

This is how he supports the President and it’s how he’s been supporting himself for the past three years, he said. He said it’s not about making the money, but he said he’s found a way to back the President.

Rep. Gosar: ‘This president has not done anything wrong’
Parties ratchet up rhetoric against lawmakers after impeachment vote
Trump vows ‘positive’ State of the Union; analysts aren’t so sure
Arizona lawmakers vote on party lines to forward impeachment to Senate
As impeachment trial begins, Arizonans play official, unofficial roles