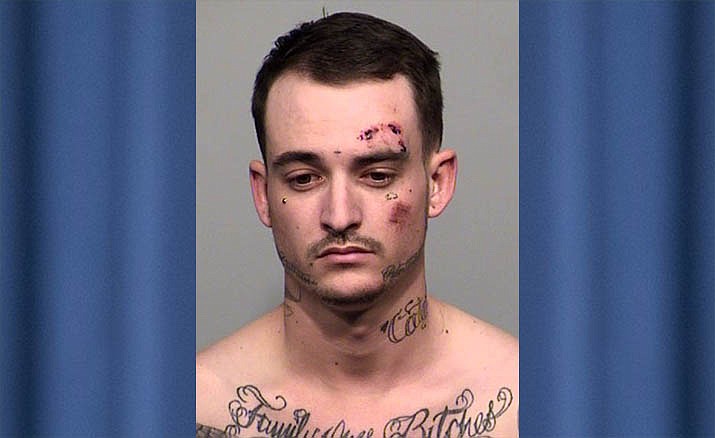 At approximately 4:45 p.m. Thursday, Dylon Horne was a passenger in a vehicle in the Sunset Point Rest Area off Interstate 17 when he was taken into custody without incident, according to a Yavapai County Sheriff’s Office news release.

Horne was subsequently booked into the Yavapai County Jail on the YCSO warrant, as well as two warrants out of Colorado, one for trespassing, the news release stated.

Horne was also charged with unlawful use of a means of transportation, two counts of kidnapping, criminal damage, theft, two counts of endangerment, and leaving the scene of an accident.

On the evening of Dec. 13, Horne reportedly took a vehicle from a home in the 4300 block of E. Shade Road in Rimrock with a 3-year-old child and 4-month-old baby inside.

According to the victim, Horne was intoxicated. The victim and a friend attempted to follow Horne in a separate vehicle and contacted Horne at a mini-mart in the McGuireville area, according to YCSO.

The victim yelled to Horne that the kids were in the car and he needed to stop. Horne drove off again at a high rate of speed and the victim was unable to follow.

While fleeing in the area of Bice Road, the vehicle Horne was driving struck another vehicle. Horne then fled the scene of the collision in the vehicle.

Another victim called YCSO dispatch reporting a vehicle matching the victim’s description had just collided with a pickup truck on Bice Road. Horne abandoned the vehicle on Kimberly’s Way, leaving the children alone in the car in cold weather.

While abandoning the vehicle, Horne took the victim’s cell phone and credit card.