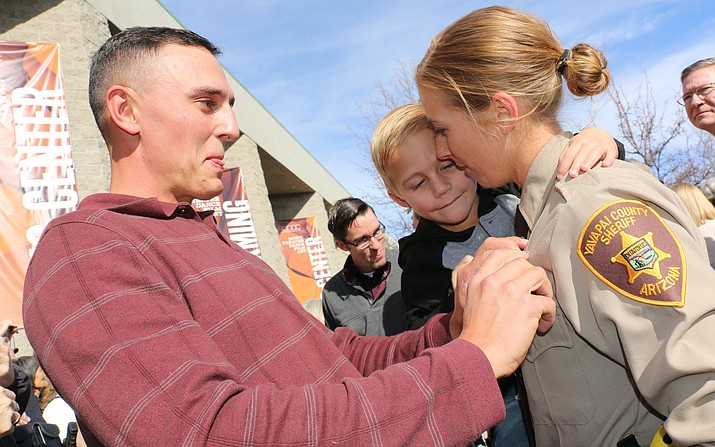 Thirty-seven men and women have made the transition from ordinary citizen to peace officer, promising as graduates of Yavapai College’s law enforcement training academy to put the needs of others ahead of their own and to help the helpless.

Thirty-seven men and women have made the transition from ordinary citizen to peace officer, promising as graduates of Yavapai College’s law enforcement training academy to put the needs of others ahead of their own and to help the helpless.

The 47th class of newly sworn police officers, sheriff’s deputies and town marshals emerged from the Northern Arizona Regional Training Academy on the YC Prescott campus upholding the motto: “Here I am, send me.” The latest NARTA graduates will launch careers with 11 different law enforcement agencies across Arizona. But first, they celebrated their individual and team achievements during a traditional swearing-in and badge-pinning ceremony Dec. 12 in a packed YC Performing Arts Center.

In his keynote speech, Arizona Attorney General Mark Brnovich wished the graduates long, rewarding and safe careers, along with an appreciation for the fact that “what you are doing is not making a living. It’s making a difference.” Brnovich went on to say that money can’t buy the rewards inherent in “ensuring justice is done and victims are made whole.”

YC President Dr. Lisa Rhine told NARTA grads that in achieving their own dreams of becoming first responders, they are directly impacting the dreams of others -- “something that very few professions can claim. The safety and security that you provide to other citizens gives them the ability to pursue their dreams,” she said.

NARTA Class 47 President, Cody Chewning, in his graduation remarks, expressed pride and gratitude to soon be serving his childhood home of Prescott Valley. “They took a chance on me and I intend to make them proud.” Chewning asserted that he and his classmates were motivated by the people they love and by people they don’t know to make it through a tough 20 weeks of NARTA training. “We all need something to fight for and something worth protecting. You give us that,” he told the YCPAC audience.

Following are the 37 NARTA graduates and the agencies they earned badges for: