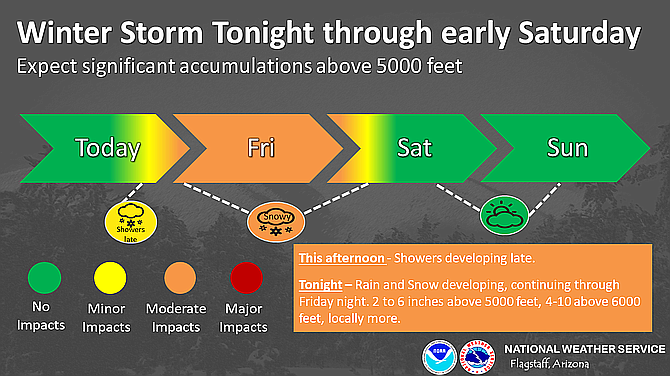 VERDE VALLEY — A Winter weather advisory remains in effect for Oak Creek and Sycamore canyons from 5 p.m. Thursday, Dec. 26, to 5 a.m. Saturday, Dec. 28, according to the National Weather Service.

Expect scattered snow showers to develop late this afternoon along the northern half of the Verde Valley, with steadier snow later Thursday evening. Snow will be heavy at times overnight and through early Friday.

Snow showers will continue during the day Friday, slowly tapering off Friday night. Total snow accumulations generally ranging from 2 to 6 inches at elevations from 5,000 to 6,000 feet, 4 to 10 inches higher than 6,000 feet, with localized amounts from 12 to 16 inches.

Sedona (which is at 4,350 feet), along with Jerome, which is at 5,100 feet, will get rain that turns to snow late Thursday night. One to three inches of snow are expected there. The rest of the Verde Valley is expected to get less than 0.2 inches of rain.

Lynn Whitman, director of the Yavapai County Flood Control District, said there isn’t major flooding anticipated along any Verde Valley water routes, but she and first responders and others are closely monitoring river and creek levels and flows.

As of 4 p.m. Thursday, water discharge was at 634 cubic feet per second along the Verde River at Camp Verde and 230 upstream at Clarkdale. The only other major tracking spot in the Verde Valley to be over 100 CFS is Oak Creek at Cornville, which was at 113.

Doney Park, Flagstaff, Prescott, Payson and Williams are forecast to be hit much harder by this week’s storm, which comes on the heels of several days of snow and rain across northern Arizona. The Pine-Strawberry area could get as much as 11 inches.

More precipitation is forecast for Monday through at least Tuesday of next week, but forecast amounts vary greatly at this point.

For the latest road conditions for the state, call 511 or visit az511.com.

The Yavapai Flood Control alert map can be found at gis.yavapai.us/alert.