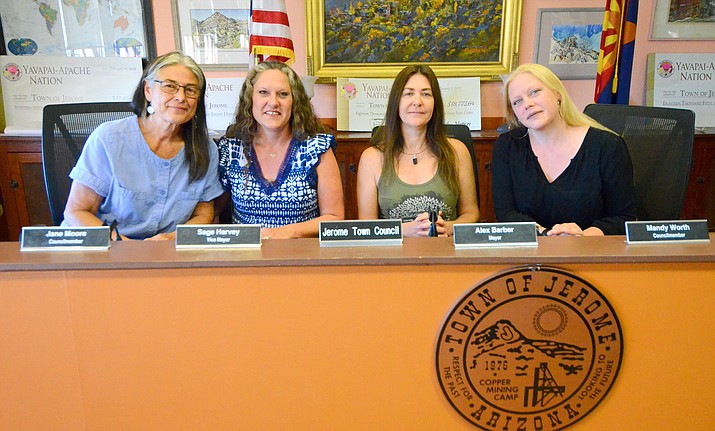 So in 2019, the town made several historic steps concerning parking and zoning in a quest to raise revenue to fix crumbling infrastructure problems and to kick-start stalling business development.

However, one of the most ground-moving decisions may have been hiring Jerome Zoning Administrator John Knight, who has been guiding the council though historic planning and zoning proposals that will impact Jerome for the distant future. 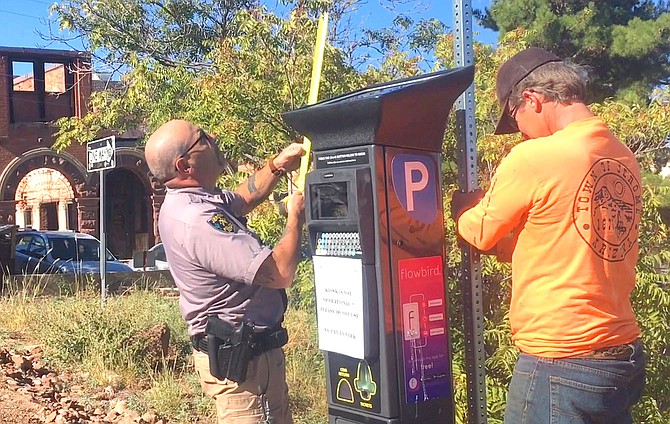 The Town of Jerome Department of Public Works Department and Police Department install the parking kiosks in Jerome in October. VVN/Vyto Starinskas

Pulled the trigger on kiosks

It took months of debates and planning, but the Jerome Town Council finally pulled the trigger on paid-parking kiosks in October.

The Council wanted to come up with a plan that did not upset local residents and did not alienate tourists who visit the former mining community.

Last week, Knight said the town has “collected a fair amount of revenue” from the parking kiosks.

There were some bumps in the road, especially with local workers, but those bumps have been smooth out, he added.

Town officials point out that there is still plenty of free parking in town, such as the “300 Level” parking lot above the fire station and along parts of Main Street adjacent to shops, restaurants and the Post Office.

Town officials view the kiosks as a means for raising revenue to help pay for infrastructure problems facing the small tourist community.

Knight, who was hired by the Town of Jerome four-and-half months ago, said the most important project they have worked on in 2019 is the Parking Overlay District.

The district has the potential of giving business owners, who don’t have on-site parking, a way to purchase spaces from the town or private individuals.

Knight said the town’s flexibility on parking will help the town encourage new businesses coming to town, and the convergence of uses by existing businesses that require more intensive parking.

The zoning administrator said that he has recently noticed a greater interest in development in Jerome and in buying and building of houses.

The council, residents and other boards have held meetings with Knight and they have planned goals and priorities for the town, he said.

The council came up with a top-five work program for 2020, and top on the list is “affordable housing” and second is “parking in the C1 District.”

“Twenty-twenty is going to be about parking again,” Knight predicted.

Cuban Queen in the mix

A Parking Overlay Zone map includes the property will be placed over the C1 (Commercial) zone in Jerome and includes the former Cuban Queen property, which was once a historic bordello building, but collapsed several years ago.

The new Cuban Queen owners could not obtain building approvals from the town because of the lack of on-site parking permits.

The amendment to its decades-old zoning ordinance would allow new businesses, such as the owners of the Cuban Queen property, to construct buildings without on-site parking by buying parking spots from the town in this district.

Knight has said that the town probably would not be going through the Overlay District process right now if it was not for the Cuban Queen issue coming to the forefront.

The Overlay District ordinance has not been finalized yet, but businesses could be added later with a re-zone, he said.

The early Overlay District map includes three privately owned parcels: the Cuban Queen, House of Joy and a vacant lot; and four Town of Jerome parcels, which include parking lots and the Slide Jail area slope. 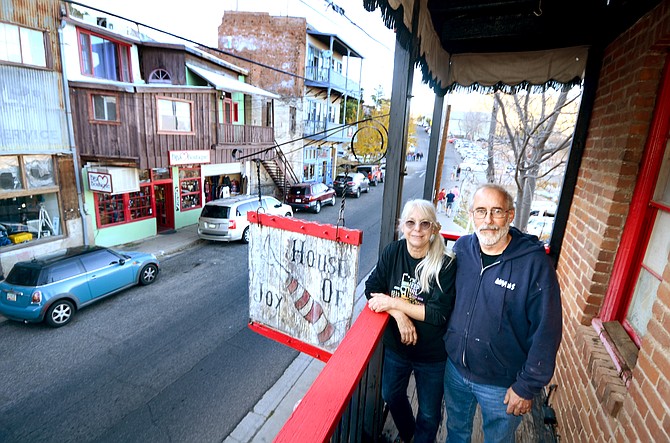 Chuck and Mimi Romberger are the new owners of the House of Joy in Jerome. VVN/Vyto Starinskas

The House of Joy building in Jerome was a brothel from 1912 to 1946, explained the new owner Chuck Romberger, who bought the business from longtime owners John and Mary Dempsey in early December.

The Dempseys ran it at a gourmet restaurant for a couple of decades and then a unique, knick-knack shop most recently.

Romberger said they want to restore the building to its former glory and it will be an art gallery with a small vintage arcade game-room. They will keep the House of Joy’s original bordello name and classic “leg” graphic on its sign, Mimi said.

The whole street had so many brothels, the area was nicknamed “Husband Street,” Chuck Romberger said, referring to the area between the former House of Joy and the former Cuban Queen brothels.

Apparently, there are no more former bordellos listed for sale in Jerome right now, but there at least three other such buildings still standing in town.

For the first time in the history of Jerome, as far as local officials can remember, there are four women on the Jerome Town Council.

Long-time Council Member Jane Moore said recently she remembers three women serving on the Jerome Council in the past, but never four at once.

Moore said it has not been unusual for women to be on the Jerome Council or even mayor through the 1980 and 90s. “There has been lots of women on the council,” she said.

Asked how four women ended up on the council, Moore said: “there were some good choices.”

Council Member Mandy Worth said she is aware of other women, and men, in Jerome, who could run for council, but said having families and busy jobs make it difficult for them to run for councils or boards.

“Sometimes it’s hard because I think that there are things that women bring to the table that we look at a slightly different perspective, but then we’re all here in Jerome and we all care what happens here,” she continued. Genders not really an issue when people vote.”

Sometimes women tend to be “better listeners, but we do stuff that piss people off too.”  Moore, who has been on seven different councils, said she “likes this one a lot.” It’s “fairly dynamic,” one council member moved here recently, two women grew up here and they remember what it was like to be a kid in town, “and I like that. You have some history here.”