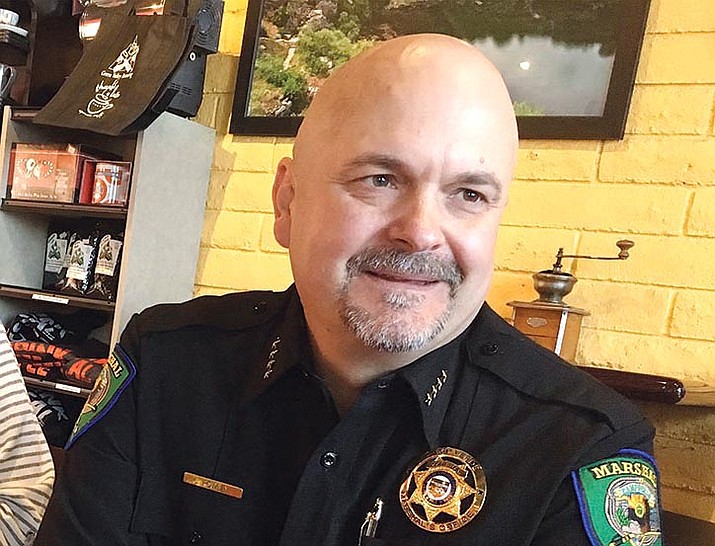 Rowley wants his community involved – so much so that he’s in the process of creating the town’s first marshal’s committee.

The committee’s idea is his, an idea Rowley brought with him from Alaska, where he served as chief of the Yakutat, Alaska Police Department.

But Rowley won’t be selecting the committee members, he said.

That responsibility will be on the shoulders of Camp Verde’s seven council members.

Rowley said that “probably” this week, he would “formally invite council members to submit names” for the first marshal’s committee.

“Single parents, laborers, students, all perspectives” are who Rowley looks forward to be among the committee’s representation.

The purpose of the committee, the marshal said, is to “bridge the gap between council and the marshal’s office.”

“I’d like to keep council more informed,” he said. “And it’s a good way to get the community more involved in the transparency of the marshal’s office.”

Once selected, Rowley and the committee will meet monthly – either once or twice each month – though he’s “open to more than two times a month if they want.”

After six months of meetings, each council will select a new committee member, Rowley said.

Though the first committee has not been formed – and the date and time of the first meeting has not been established – meetings will be “about 60-to 90 minutes” and held at the Camp Verde Marshal’s Office, located at 646 S. 1st St.

Rowley said that meetings will be open to the public, but there will not be a set agenda.

“We’ll get more into the actual daily, weekly activities of the Marshal’s Office,” Rowley said.

The committee, Rowley said, is a “separate thing” from the monthly Coffee With a Cop meetings, which will continue to take place.

“This is us doing community outreach,” Rowley said. “Setting the PACE. It’s about community and accountability. If something is going on, we’ll definitely hear from the people who are in the meeting.”