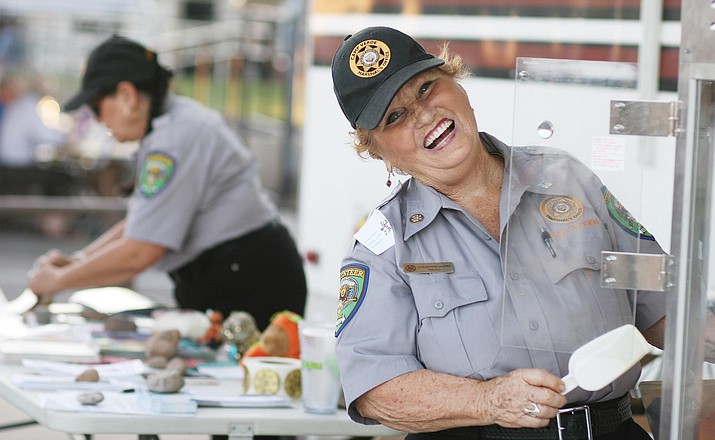 Tim Wiggle will never forget a piece of advice his training officer gave him when he was a rookie volunteer with the Camp Verde Marshal’s Office.

When you’re driving, keep your windows down. You never known when you’ll hear a noise that isn’t right.

Wiggle, now sergeant of the Marshal’s Office’s Volunteers in Policing program, also learned that checking in with his fellow Camp Verdeans is “good community outreach.”

It’s been two years since Wiggle started volunteering with his local law enforcement agency. After a career “working for government,” Wiggle said he wanted something productive to do in retirement, after he and his wife Marge moved from the Detroit area to the Verde a few years back.

“The volunteer program is an excellent way for a citizen to get involved in the protect-and-serve aspect within the community as well as give back to the community freely,” Jardine said.

The Marshal’s volunteers go through extensive training so they can help with special details such as event foot patrol for Fort Verde Days and National Night Out, as well as DUI saturations, Task Force, radar trailer deployment, missing persons response, and a variety of office work such as evidence/filing and documenting evidence.

Pat George names dogs based not on their appearance, but by their behavior.

Some of the names she’s recently used are Sir Barks a Lot, Rags, Dinosaur, Monkeyface, Smokey, and Marley.

An animal control volunteer, George said that sometimes her VIP time is akin to a full-time job.

One of three volunteers who aide the town’s animal control officer, George helps because she “care[s] for the animals.”

“And it saves the town some money,” she said.

Animal control volunteers pick up dogs and bring them to the impound, located on Industrial Drive. They feed the dogs, take them out for bathroom walks, let them get their exercise, help with minor grooming – and they’re available on “short notice.”

Earlier this year, Wiggle became VIP sergeant. CVMO Sergeant Tom Baizel asked Wiggle to lead the program when he recognized that his volunteer was “very dedicated to promoting and extending the VIP program in to the future.”

“With Tim at the helm, it frees up myself from having to directly supervise the VIPs to ensure they are completing the required monthly time as well as tracking the hours that the VIPs volunteer here,” said Baizel, who is Wiggle’s direct report. “This allows me to focus on the deputies working and other patrol related items.”

According to Baizel, the hours that the Marshal’s volunteers have put in have saved the department – and the Town of Camp Verde – a “huge amount of money.”

“As Tim’s direct supervisor, he comes to me whenever he needs something for the VIP program,” Baizel said. “Tim’s past experience with running his own business and his reliability has allowed him to step in to a supervisor role here.”

Not only do the volunteers save money, but they allow deputies to protect and serve Camp Verde, said Wiggle, who put in more than 1,000 hours a year ago with the Marshal’s Office.

A year ago, five volunteers, including Wiggle and George, put in at least 200 hours at the Marshal’s Office. Still working full-time, Marge Wiggle volunteered 46 hours a year ago. Overall, CVMO volunteers worked 2,511 hours in 2018.

But the Marshal’s Office is looking for more volunteers for its VIP program.

From 5 p.m. until 7 p.m. Tuesday, Feb. 19, the Camp Verde Marshal’s Office will host an open house to solicit volunteers for its Volunteers in Policing program.

Wiggle said recently that he’d “like to get a half-dozen more, fully trained” volunteers for the program.

For more information about volunteering with the Camp Verde Marshal’s Office, contact Tim Wiggle at 810-531-0684 or tim.wiggle@campverde.az.gov.