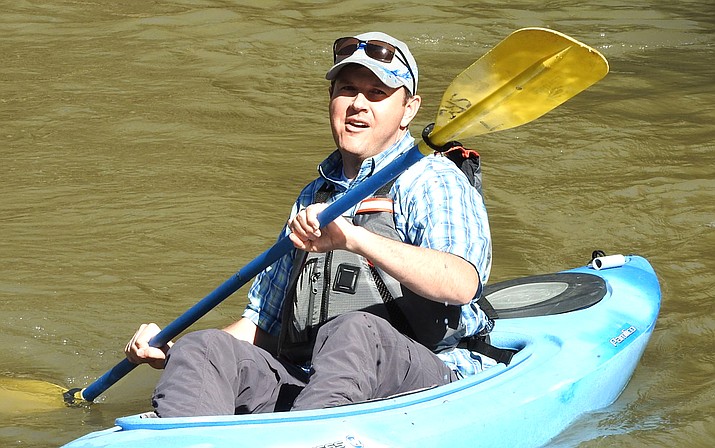 According to Lucas Shaw, water rights analyst for the Salt River Project, more than 85 percent of lands irrigated today in the Verde Valley “have evidence” of historic water use. Courtesy photo

VERDE VALLEY – Because irrigated property is generally more valuable than non-irrigated property, having historic water use should be important to many landowners, said Lucas Shaw, water rights analyst for the Salt River Project.

“Historic water uses have documentation which supports the time in which they began and the extent – acres – to which it was used,” Shaw said. “If you were around in 2002-2003, you may recall many ditches in the Verde Valley having to coordinate their diversions from the Verde River because flows were so low. This was done out of necessity rather than priority, but was still an example of the importance of an early water right.”

The following is an excerpt from a series of questions Verde Valley Newspapers asked Shaw:

Lucas Shaw: “Historic water uses are those water uses on lands where there is documentation showing there was water use on that land prior to 1919.

“Arizona surface water law, like many western states, is based on the doctrine of prior appropriation. This means two primary things.

“First, water rights are appurtenant to, or belong to specific lands. When the land is sold, the water right goes with it. The water right may not cover the entire parcel of land, only those areas where water was used historically – pre-1919. Water rights can be transferred, but this is rare and requires the approval of Arizona Department of Water Resources in most cases.

“The second part is that earlier water uses have a higher priority than later water uses. A water user with senior water rights is entitled to his entire share before a junior user receives any.

“The effective administration of surface water rights requires adjudication or a court determination of those water rights.

“Unfortunately, besides a few decreed and settled water rights, there are few adjudicated surface water rights in Arizona. This has resulted in a lot of confusion and uncertainty about water rights today.”

VVN: Which sources and documentation support these uses?

Shaw: “The most detailed sources documenting historic water use in the Verde Valley are various irrigation surveys, reports, and aerial imagery ranging from 1893–1934.

“Salt River Project has preserved many of these sources over the years and they form the basis of our understanding about what lands have historic water use.

“Affidavits or recollections about water use after 1919 are not very meaningful to demonstrate pre-1919 water use.”

VVN: Why are questionable uses a problem?

Shaw: “Questionable water uses are a problem because they impact users with senior rights, which could be their own neighbors or SRP’s water users in the Salt River Valley.

“The most ignored impact of questionable uses is the impact to the Verde River. The Verde River ecosystem is so unique and totally dependent of sustained flows of the river. It’s a precious resource which everyone should care about, not just those with water rights.”

VVN: Who are questionable uses a problem for?

Shaw: “They can be a problem for buyers looking at properties to purchase, as well as sellers and realtors trying to market properties.

“Developers want to know there are no water issues before investing their money to build something. Communities want to know their long-term water supply is physically and legally secure to plan for the future.

“Neighbors want to know other users on the ditch aren’t taking away from their water supply. Even water providers as far away as Phoenix are impacted by questionable uses.”

Shaw: In the 1950s and 1960s, the Salt River Project saw “significant residential and agricultural growth in the Verde Valley, which added pressure on the Verde River.”

“In 1976 SRP petitioned the Maricopa County Superior Court to initiate a general stream adjudication for the Verde River Watershed, in order to determine the water rights of Verde River water users, relative to SRP’s rights established in the Kent Decree of 1910.

“Historic water use agreements are one way to achieve greater water certainty for landowners and SRP while the adjudication proceeds.”

WHOSE WATER IS IT? Salt River Project explains historic rights, questionable rights, water certainty
One step (and acre) at a time: SRP, Verde landowners working together to voluntarily secure water future
LISTEN: Buyer Beware -- You may own the land, but do you also own the water?
An ironclad understanding of water rights
Commentary: Let’s keep working; Court decision is not a stopping point
Event Calendar