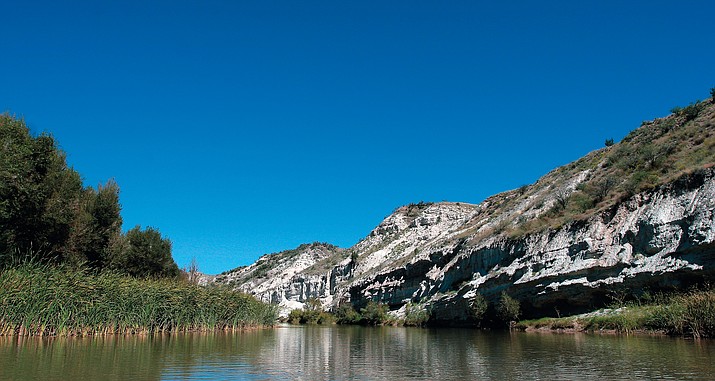 Salt River Project has asked 125 Camp Verde landowners to review historical documents and enter into agreements regarding historic water use for their properties. Each of the contacted owners holds title to land that is irrigated from the Verde Ditch Company, utilizing Verde River surface water. VVN/Bill Helm

Finding solutions to water problems “is in our DNA,” said SRP Water Rights Analyst Lucas Shaw. “These solutions are not always building infrastructure, and today most of them involve cooperation with other water users.” VVN/Bill Helm

The website LawForSeniors.org is a veritable treasure trove of information that breaks down water rights in the most layman of terms.

For those who prefer the human touch, there’s always Lucas Shaw, water rights analyst for the Salt River Project.

It was 100 years ago – June 12, 1919 to be exact – when the Arizona Surface Water Code was enacted. What this means, Shaw said, is that water users must apply and receive a permit for new or expanded water uses.

Before 1919, water users “generally only had to provide written notice of their new water uses,” he said. “Then, they could begin using water.”

Without proof of historic – pre-1919 – water use on lands, it is believed that the water use began after 1919 and are subject to the Arizona Water Code, Shaw said.

Historic water uses, according to Shaw, are the water uses on lands where there is documentation that proves water use existed on that land prior to the Arizona Surface Water Code.

How questionable uses came about

According to Shaw, questionable uses started after Arizona’s Water Code was passed – and they continue today.

Farmers and landowners “gradually expanded irrigation to new acres without complying with the requirements of the Water Code,” Shaw said.

Over time, properties were subdivided and “water use continued on those expanded areas,” he said. Some expansion has been more recent by users “unaware of Arizona’s surface water laws.”

Too often in the Verde Valley, buyers take the sellers or realtor’s claims of grandfathered irrigation or similar sounding statements at face value, and they may or may not be getting property with substantiated water rights, Shaw said.

A Camp Verde landowner, Linda Buchanan, has bought and/or sold eight Camp Verde properties since 1981. Buchanan said that her “hope is that someday, through continued research and reckoning, we as a community will have readily available, no-fee resources to ensure water-certain real estate transactions, reduce litigation, and protect the river with sustainable allocations.”

“The current landowners being offered Historic Water Use agreements with Salt River Project are a good example of achieving Water Certainty.”

Salt River Project has asked 125 Camp Verde landowners to review historical documents and enter into agreements regarding historic water use for their properties.

Each of the contacted owners holds title to land that is irrigated from the Verde Ditch Company, utilizing Verde River surface water.

According to Shaw, SRP’s Water Certainty Initiative means that “agreements with landowners to recognize those lands will give both parties greater certainty.”

“SRP gets the certainty that water use will not expand on these parcels and landowners get certainty knowing that the largest downstream user will not contest the area of historic water use,” Shaw said.

Finding solutions to water problems “is in our DNA,” Shaw said. “These solutions are not always building infrastructure, and today most of them involve cooperation with other water users.”

In 1903, a group of water users who, as Shaw said, “sought greater certainty in their water supplies” formed the Salt River Project - SRP.

According to Shaw, SRP recognizes that more than 85 percent of lands irrigated today in the Verde Valley “have evidence” of historic water use.

“SRP would like to recognize these lands by entering into agreements with landowners, and see if we can find solutions for the remaining 15 percent of lands,” he said. “We think that having an agreement with the largest user on the Verde River is something that could set a property apart from the others, and adds value to a real estate transaction. For farmers, having water rights issues can frustrate or prohibit grant opportunities and participation in other programs.”

The greatest benefit to landowners of irrigated property, Shaw said, is “having peace-of-mind knowing that for your property you have an agreement with the largest water provider on the Verde River.”

In the Verde Valley there are 43 ditches, of which 15 are “large ditches” and serve at least 10 users each, Shaw said. The other 28 ditches, “the smaller ditches,” Shaw said, serve fewer than 10 users each.

The following are the 15 large ditches: