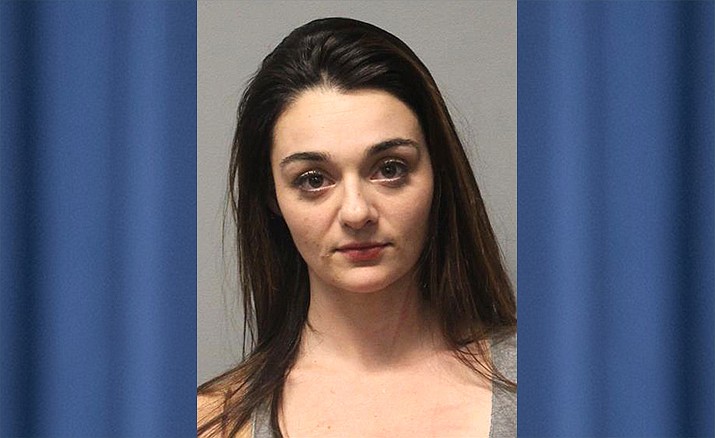 This jar containing "marijuana wax" was found with the child. The label indicates a special strain of cannabis, according to the Yavapai County Sheriff's Office.

According to Yavapai County Sheriff’s Office Media Relations Coordinator Dwight D’Evelyn, at around 10:45 p.m. Saturday, deputies were alerted to the assault of a 30-year-old woman.

D’Evelyn said deputies were dispatched to a home the 5500 block of Barbara Lane in Rimrock regarding an assault. It was also reported the suspect -- 28-year-old Kathryn Barbosa-Cabral -- left the location in a black Volkswagon, possibly intoxicated, with a 3-year-old child in the car.

D’Evelyn said when deputies arrived, they found the VW parked in a neighbor’s driveway, engine running, and her 3-year-old daughter sitting on the front passenger seat with a plastic container of marijuana and marijuana “wax” in her lap and an open bottle of whiskey nearby.

Barbosa-Cabral eventually came out of the home and appeared under the influence of alcohol, according to the news release from D’Evelyn. She explained that she left the car running to keep her daughter warm while she was in the home and could not explain why she left drugs in her daughter’s possession.

“Her statements were rambling and generally unintelligible,” said D’Evelyn.

Barbosa-Cabral said she had come to the home to confront the victim about some issues they were having as a couple.

The victim told deputies during the confrontation, Barbosa-Cabral kicked her and hit her in the face. Visible injuries supported this claim, said D’Evelyn.

Barbosa-Cabral was booked on allegations of assault, disorderly conduct and criminal damage per domestic violence, child abuse, possession of narcotic drugs and paraphernalia. She has since been released from the county jail and the child was released to a family member, said D’Evelyn.