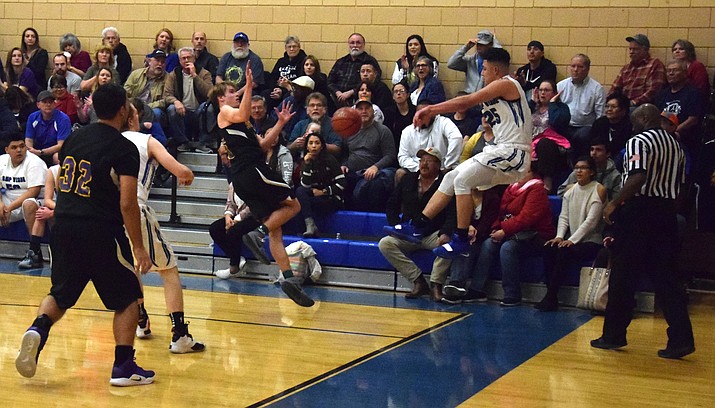 Camp Verde junior Abe Gonzalez throws the ball off of a Spartan after getting a steal during the Cowboys’ 76-72 loss to Gilbert Classical at home on Tuesday night in the state play-in game. VVN/James Kelley

“I was very pleased with how hard our kids played and the effort that they put forth and some of the stuff we did was just terrific (Wednesday) night,” CV head coach Daniel Wall said. “Very impressed with Gilbert Classical, they played a heck of a game (Wednesday) night. They hit a ton of shots, tough shots, contested shots, shots in difficult situations. I mean you gotta give those kids a lot of credit because I thought our kids played pretty well defensively and they just hit some tough shots.”

Gilbert Classical led in the first half before CV clawed back and tied it up at 32-32 at the half.

The Cowboys jumped out to a six-point lead in the third quarter but the Spartans erased it and then took the lead back. The lead went back and forth until the GC took it for good with 4:45 left in the game.

“We got some stops defensively and then were able to get out in transition and finish a little bit,” Wall said about the second and third quarter runs. “That was one area where I thought we struggled (Wednesday) night, our transition, just finishing the possessions. So those two runs we were able to get stops and then convert on the other end.”

“He was very tough (Wednesday) night, I mean him and Abe both had great nights and obviously kinda kept us afloat on the offensive end of things a little bit — or a lot,” Wall said.

“As I told the kids in the room, ‘there’s a lot of emotions attached to a tough loss like this where you’re thinking you’re gonna get through this game but you gotta take a step back and look at what you guys have accomplished this year and they’ve had some really neat accomplishments, second in the Round Valley tournament, winning the Yvonne Johnson tournament, four losses total in the season, I mean those are things that a lot of teams never get to experience,’” Wall said. “So being able to take a step back and see what kind of a year they had was my goal.”

The play-in game was played before what was likely a standing room only gym and in the second half the section of CV students did stand up in the bleachers.

“That was so fun to have everybody supporting and getting into the game and getting excited about it,” Wall said. “I think the kids feed off of the energy. It was just a really fun atmosphere (Wednesday) night.”

After winning the Central Region championship in the regular season, last week the Cowboys added the Central tournament championship to their infinity gauntlet. They beat Scottsdale Prep 68-54 in the semifinals and then Glendale Prep 60-44 in the championship game after the CV girls won their region title.

“That was a lot of fun last weekend,” Wall said. “Any time you have a chance to go win a region championship with the girls and the boys and then you do it, that’s pretty neat stuff. So another fun atmosphere last weekend for sure.”