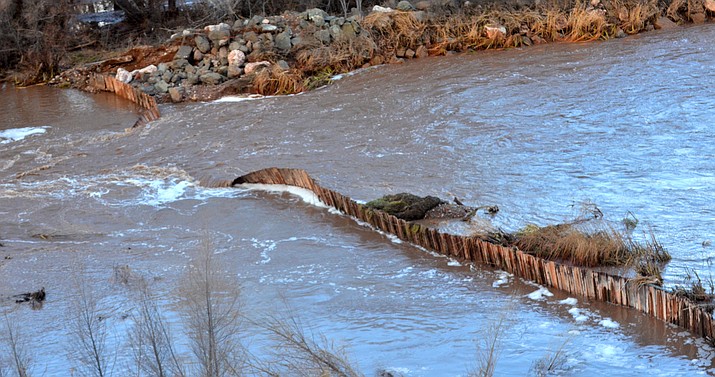 LOCAL VIDEO - Friday’s flood breached the metal dam on the Verde River in Clarkdale, seen in a video on Saturday morning after waters receded. Follow this story and other stories about flooding in the Verde Valley in Sunday’s Verde Independent. VVN/Vyto Starinskas #arizonaflooding #AZ #AZnews #VerdeNews

CLARKDALE -- The collapse of the 105-year-old metal dam in Clarkdale on the Verde River may be an opportunity to get rid of the obstruction and return the river back to its original eco-system.

That was the assessment from Verde River Institute Executive Director and Clarkdale Mayor Doug Von Gausig Saturday morning after analyzing his drone photos on the Verde River Facebook page.

The Verde River Institute is monitoring the damage from Friday’s dam breach, which is already beginning to “reform the river,” said Von Gausig.

However, it’s up to the owner of the dam, Freeport-McMoRan, whether to rebuild the 250-foot-wide barrier or tear it down.

Von Gausig said the institute sees this as a “huge opportunity” to take down the dam that many people see as “wounds on rivers.” This particular dam is acting as a natural fish barrier, affects the habitat and ecosystem. Taking down the dam would bring the area back to its natural state, said Von Gausig.

One other big problem is that the dam has created a three-quarter mile wide pond just before the dam that grows thick with invasive aquatic plants, he said. This would be washed out if there was no dam.

The dam also affects kayaking on the Clarkdale’s Verde River permit program, which runs from the TAPCO launching area to the Tuzigoot parking lot. It’s dangerous to have kayakers getting out to avoid the rough metal dam at that location, he said.

Von Gausig said the owner of the dam, Freeport-McMoRan, has water rights associated with the barrier and the company doesn’t want to lose them.

Von Gausig said that dams are obstacles in the middle of rivers. That is why the institute, as well as the Town of Clarkdale, have held the position to get rid of the Clarkdale dam, but with the understanding that it’s up to the owner, Freeport-McMoRan.