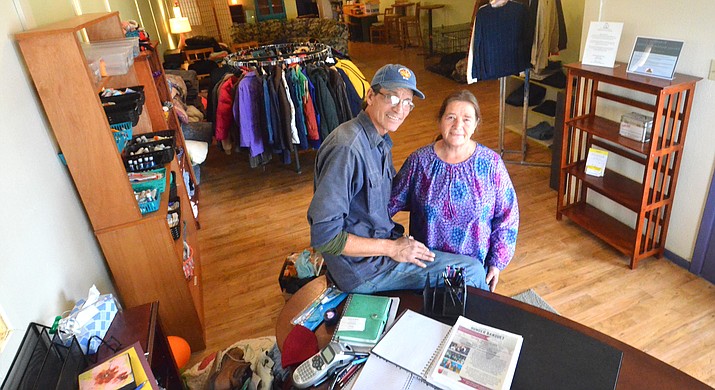 Wing and Laurie walk the talk when it comes to helping the homeless in Sedona. VVN/Vyto Starinskas

SEDONA -- The Sedona Area Homeless Alliance new homeless resource center in Sedona has opened on a “Wing” and a “prayer.”

The “Wing” is Wing and Laurie – the couple who founded the SAHA.

Wing and Laurie (they prefer first names only) walk the talk when it comes to helping the homeless in Sedona by raising donations and distributing food and temporary shelter items for the past three years -- at times while living out of their car with their two dogs.

The “prayer” is the $10,000 in donations they have been hoping for to open their center. They have raised $3,000 since it was leased in January.

They don’t want to call their new homeless office a shelter.

The space is filled with couches and tables and it’s a place for homeless people to come in and socialize, Laurie said, but it’s much more than just that.

“Our mission is to provide immediate need, to keep people safe and alive; but our main mission is reconnect our local homeless back into our community.”

“Everything we do is very purposeful,” Laurie said. “Building up a homeless person’s self-respect encourages them to seek jobs and housing on their own,” she said.

Take all you need

Walking into their homeless center, it appears to be a spotlessly clean, second-hand store with several racks of coats and clothing. The difference is that all the coats and clothing are free, and Laurie stresses that people can take as much clothing or anything in the center that they need.

Laurie said she has worked with about 15 homeless people since they opened, and all of them need help -- despite having employment in Sedona.

“Most of our local homeless do work,” she said.

“I don’t know any of our local homeless that don’t support themselves,” said Laurie, “Some are professional jobs, some have businesses that do yardwork and things like that,” and “we have so many people who are artists that sell things at local shops.”

Laurie said homeless live in tents and in cars and work in Sedona. A lot of times people don’t take showers, they go to the library or one of the local stores and wash up in the bathrooms.

She said people don’t really join gyms just to take showers because of the cost. Some people go to the state parks, Laurie added. “People don’t like to be in those situations,” she said.

Beyond the coat and clothing racks are several couches where homeless people can relax and get off the street. In the summer, that can mean 100-degree temperatures. Laurie said all the furniture has been donated.

In the back of the office they have a food cupboard, with shelves of food geared to their population; quick to serve and eat. They said that volunteers bring in hot lunches in pots.

The socializing between the homeless people “has happened so organically and naturally, it’s been amazing.”

Laurie said the next week will be cold and wet and she expects to have people coming in out of the cold.

The new center cannot offer overnight shelter, according to the agreement with the landlord, she said, but added that their space is not right for an overnight shelter. If they opened a cold-weather shelter, it would be in another location where they would have more space or go back to renting motel rooms in emergency cold-weather situations.

Laurie said the organization can use volunteers, food and clothing donations. People can donate to SAHA at Sedonahomeless.org

“The more times people come in and they feel like they are at home, the more they remember what that feeling was, and the more that they desire it,” Laurie said.