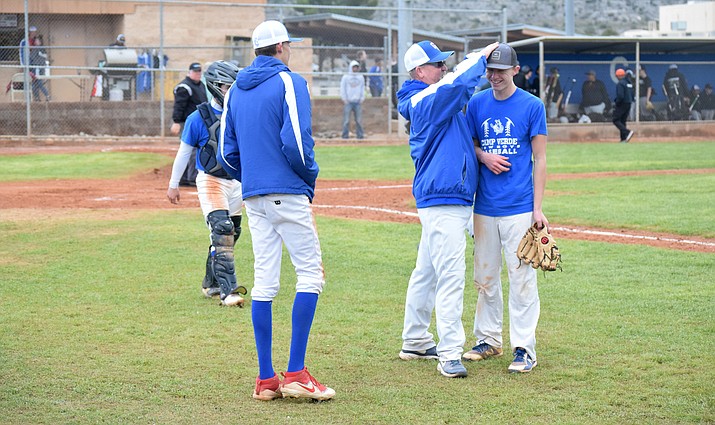 Camp Verde head coach Will Davis congratulates sophomore Mason Rayburn after he pitched against Williams in the Cowboys’ scrimmage at home on Saturday. VVN/James Kelley 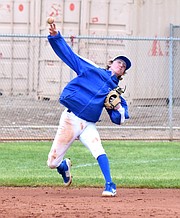 Camp Verde senior Dakota Battise throws the ball to first base during the Cowboys’ scrimmage at home on Saturday against Williams. VVN/James Kelley

What a difference a year makes for Camp Verde High baseball.

The loaded Cowboys are expecting a deep run in the postseason this year.

The Cowboys open the season on Wednesday afternoon when they host Mayer at 3 p.m.

This time last year the Cowboys were starting what was supposed to be a rebuilding season.

“Last year was a lot of learning this early in the year and we didn’t have one returning varsity starter last year and this year we returned them all,” Davis said. “So now it’s a refresher course, a lot simpler, a lot easier for them, they’re not trying to learn everything, they mostly know it, they’re just refreshing their mind and getting ready for our defensive rotations and stuff like that.”

Although they didn’t struggle last year after losing 10 2017 seniors, the Cowboys are again very experienced.

Last year they tied for first place in the region, losing out on a tiebreaker to Northland Prep on the final day of the regular season.

“Yeah it was frustrating cuz I got hurt at the end of the year, so I couldn’t throw the last game and all that kind of stuff, but hopefully this year I don’t get hurt,” senior utility player Dakota Battise said.

The Cowboys lost 5-3 at NPA in the season’s final game.

“I think every past season carries over a little bit on some way, shape or form but considering we were a senior less team last year that was starting three sophomores and a freshman, I felt pretty good with the season we had, but yeah I’m looking for a lot more this year,” Davis said.

Bruno was region player of the year.

On Saturday the Cowboys scrimmaged Williams on the muddy field and in the cold.

“I think it went really good, we came out and we hit the ball hard, played well, I mean we didn’t hardly make any mental errors and that’s what we’re coming out here trying to do,” Battise said.

Davis is exciting about the Cowboys defense and offense and he said their pitching staff is great.

“We have the strongest pitching staff I’ve had in all my years here, so I’m excited,” Davis said.

The Central Region realigned this year so it’s a mystery but the Cowboys figure to contend again.

“Our region I really don’t know a lot about because there was a lot of changes,” Davis said. “Northland comes back, they only had one or two seniors last year, so I think they’re gonna be pretty good this year. Sedona’s pretty young, so I don’t know how good they’re gonna be, Glendale Prep and those teams are never really good, but we do have North Pointe coming down out of 3A, I don’t know anything about them, so hopefully they’ll be a good, tough team that we can compete with, then we have a team coming up out of 1A that’s not expected to be real good, so the region’s not going to be real strong.”

McCune said if they play as a team and communicate they can do well this year.

“I think we want to come out and win every single game that we can, try going undefeated throughout the season,” Battise said. “We don’t have a hard schedule, it’s gonna hurt us on playoffs, but I think we’ll do alright.”