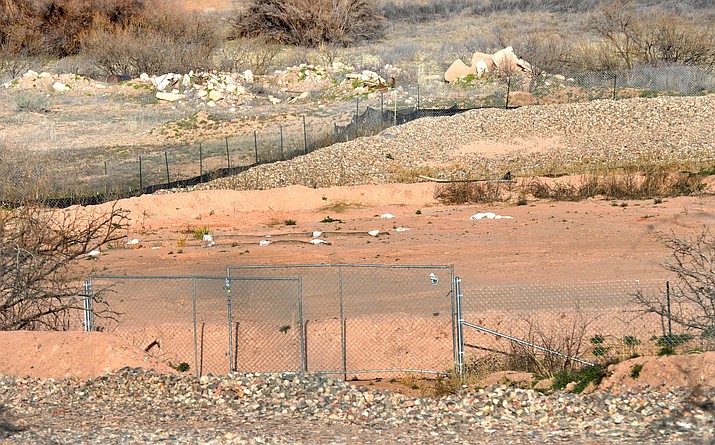 A temporary soil containment site just off Sycamore Canyon Road is storing the soil that has been removed from Clarkdale in the Verde Soil Program. VVN/Vyto Starinskas

CLARKDALE -- It appears workers will resume removing contaminated soil from lawns and properties in Clarkdale again this summer.

Crews hired by Freeport began cleaning up contaminated soil from yards and public property in Clarkdale last May, but the voluntary project stopped when the clean-up subcontractor left town in October.

Neither Freeport nor the town has explained why the crew left and why a new sub-contractor is being hired. Last October, the town was under the impression it would only be a three- or four-week delay in the three-year project.

“However, when soil removal re-commences in the summer, the soil removed from Clarkdale properties will be taken to a lined repository on a parcel of land owned by Freeport, near Sycamore Canyon Road, approximately one-mile northeast of the Town of Clarkdale,” Telle said last week in an email

About 550 properties in the UVSP study area are currently participating in the program, Telle said.

The UVSP has completed remediation and restoration work on 41 properties in Clarkdale, Telle said in February, and as of August, 463 “Soil Cleanup Access Agreements” have been signed in the remediation program, according Freeport Minerals Corp. monthly summary report to the town.

The goal of the voluntary program is to clean up property from smelter-related impacts to the soil in Clarkdale from the former smelter, which operated until 1953, Telle said. Freeport is offering soil replacement and restoring of landscape at no cost to property owners, he added.

Besides the private properties that have been cleaned up, the soil atop the Main Street Park was completely removed and replaced and reopened on June 23.

The contaminated soil is currently being stored at a temporary site between Sycamore Canyon Road and Pecks Lake until permits are approved for another permanent repository site nearby, across the road from the TAPCO access point at the Verde River.

“ADEQ approved the construction of a lined soil repository to permanently store impacted soil from soil removal activities under the UVSP. Approvals from Yavapai County also have been received,” Telle explained about the 6-acre site across from the TAPCO parking area.

“The (permanent) repository has been designed to prevent impacts to the Verde River both during the construction and for the operational life the repository,” Telle stated in his press release.

The completion date filed with ADEQ for the temporary soil contamination site was August of 2018, she said, but the permit for the temporary storage pile will remain open until the AQEQ project manager determines all work is complete, including an inspection procedure, and until Freeport meets the conditions for termination and formally submits a Notice of Termination.