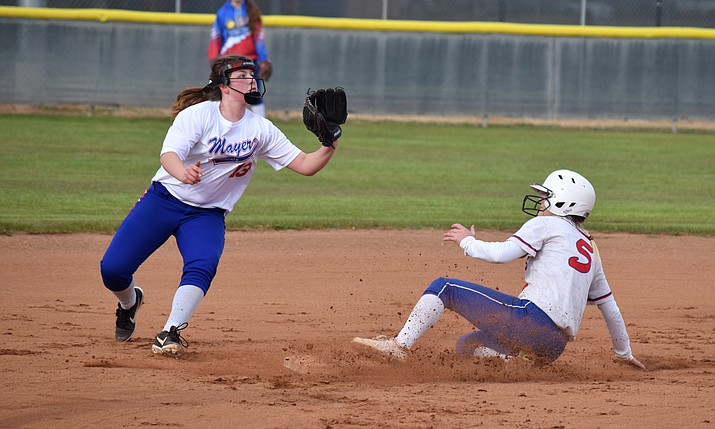 After another state runner up finish last year, Camp Verde High softball is looking for more.

The loaded Cowboys think they can improve on their second place finish of a year ago, when they lost in the state championship game to No. 1 and defending state champion Benson.

“We’re looking sharp,” CV head coach Henry Smith said. “This team is very disciplined, they’ve been working for four or five years straight for this season, so they’re all excited, they do have a goal in mind. We started out preseason talking about what our ultimate goal is and at the end it’s to hold up a trophy and they’re not too excited about taking second twice. We have a group of seniors here that have played in two championship games and came up short, so they have a definite chip on their shoulder and they’ve been feeding that to their younger teammates, so that younger group has bought into that and our older girls are sharing their experience in the state games and so these youngers are figuring it out and they’re picking everything up a lot quicker.”

Camp Verde’s seniors have finished second in the state twice and reached the semifinals as sophomores.

“I think we’re going to be just as good as last year and hopefully we can have a different outcome but we all worked pretty hard and we learned pretty fast so that will be good,” CV senior Tyra Smith said.

Tyra Smith said getting to the state championship game helps with nerves because she was less nervous in her second appearance.

“It makes me want to finally win it all because I’ve already been there twice, so it makes me want to actually take it all this time, instead of making it there and not finishing what we started,” Tyra Smith said.

The Cowboys did lose senior catcher Jade Oium, was second team all-region but they return a lot.

Finley, who was the region defensive player of the year and first team all-state, is back to full health after missing the start of the basketball season. Plus Arizona Fastpitch Softball Hall of Famer Ronnie James has joined the Cowboys’ staff as pitching coach.

“I didn’t have her pitch at all during the offseason so she’s very fresh, she has zero injuries, no disabilities, she’s 100 percent recovered, she’s good to go,” Henry Smith said. “She’s going to catch up. We were able to hire a pitching coach, Ronnie James, this year and that helps our team chemistry. He’s able to work with them and he has tons of experience, he’s a hall of fame pitcher, so we just brought a ton of talent into the pitching staff.”

In the season opening 18-0 win over Mayer on Wednesday, Finley had five strikeouts in three innings of work.

“I’m a little sore and a little off from last year but I’m hoping to get back into it as quick as possible,” Finley said.

“It’s been a lot of fun, it definitely helps a lot during practices when he’s there,” Finley said.

Against Mayer, the Cowboy pitchers tossed a one-hitter and gave up zero walks.

“He’s gonna take us hopefully over the edge,” Henry Smith said about James. “Our pitching should be a lot better. We showed (Wednesday), we only had one walk (Wednesday), so that’s a tribute to our new pitching coach and our staff being able to adapt and listen to him, so good progress.”

Henry Smith said the Cowboys have a full roster of players that could start.

Against Mayer, the Cowboys scored at least three runs in every at bat. Carlee Oesterreigh had three RBIs and Casillas and Finley had two.

“I think we did well, we’re really working on seeing the ball and hitting and being patient and staying comfortable in the box because I think that’s what lost us the championship game last year, so we focused on the mental part of hitting and just staying relaxed and staying disciplined and under control and you see (Wednesday) they were hitting the ball and using the whole field to play,” Henry Smith said. “In the past we were more or less just trying to hit the ball but (Wednesday) we were able to use the while entire field, we had a ton of balls that went to right field and that’s staying inside the ball, that’s a good sign that we’re hitting the right way.”