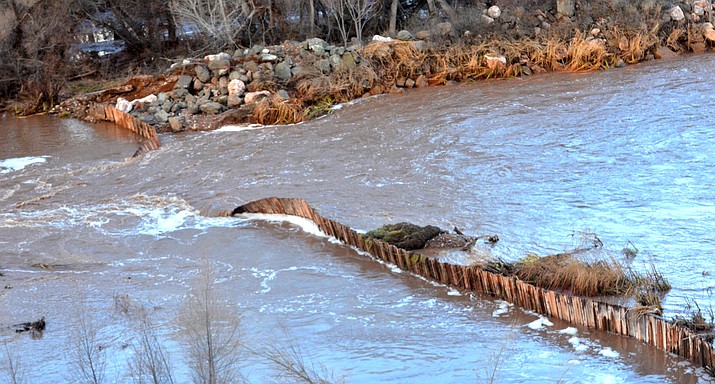 Last week’s flooding on the Verde River caused a breach in the 105-year-old dam that diverts river water to Peck’s Lake. VVN/Vyto Starinskas

Exercising your rights is not always the same as doing the right thing.

Freeport-McMoRan did not design or build the dam, but, rather, acquired it as the latest in a long series of mining companies that once actually were in the mining business in the Verde Valley. Locally, Freeport-McMoRan is more of a land-holding company today than it is a land-use business.

It’s been years since Peck’s Lake was on the checklist of the Verde Valley’s most-loved amenities. The golf course that once weaved its way around the lake is gone. Ditto for the picnic and day-use areas that were a local attraction. The annual July 4 fireworks show at Peck’s Lake is now nothing more than a distant memory for old-timers. The one-time promise of a custom-home subdivision around Peck’s Lake never materialized.

In fact, you can’t even get to Peck’s Lake any more. The road was blocked off years ago. It’s clearly off limits to the public.

So the question for Freeport-McMoRan: Is Peck’s Lake really worth it just for the sake of retaining those water rights on the Verde River?

Without the water diverted from the river, Peck’s Lake will go back to its natural form, which is an extension of the marshlands commonly known as Tavasci Marsh, one of the richest aquatic bird habitats in Arizona.

Likewise, without the dam diversion, the Verde River will return to its natural state as one of the last-remaining continually free-flowing high-desert rivers in the Southwest. The absence of the dam will allow fish and other aquatic species an undeterred path through the river. It will make the river all the more attractive to kayak and canoe enthusiasts.

It will allow the river to flow as it was meant to.

Again, there is no debate as to the propriety of the Verde River water rights owned by Freeport McMoRan. That is an uncontested issue.

The bigger question is what is the right thing to do now that Mother Nature has firmly decided who really is the boss on the Verde River?