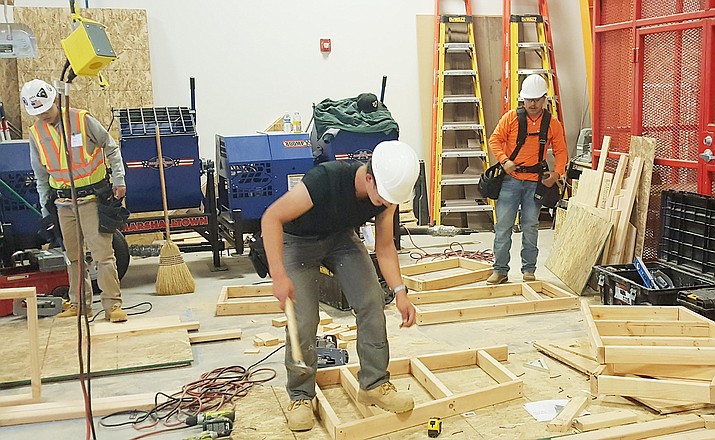 Travis Black, Skills USA Adviser and Valley Academy’s Construction Instructor, said that each of the seven career and technical education students to compete at the regional competition “worked very hard.”

“I was proud of all my students,” said Black. “At the end of the day, they all did a wonderful job.”

In the job interview category, Charlee Lozano competed against 25 students and finished first. A student at Mingus Union, Lozano was required to complete a resume, fill out an application, and sit through a formal interview. Each part of the competition, Black said, was evaluated by a panel of judges.

“At the end of the day, Charlee sat on top of the podium with the first-place medal and a scholarship,” Black said.

Connor McTurk and Jake Parker finished second in electrical and masonry, respectively. McTurk, also a Mingus Union student, “had only been working on electrical for a few days before going to the competition,” Black said.

In the electrical competition, McTurk was responsible for blueprint reading “in which you had to read a diagram and install different components for residential wiring, which included conduit bending, installing a GFI and a three-way switch to a light fixture from a main panel,” Black said. “It all had to work at the end of the day and be to plan.”

“He learned a lot about how competitions work and time management,” Black said about Parker, whose masonry competition consisted of reading a set of plans, “then building a small four-foot wall out of different dimensions block per plan.”

“Everything’s got to be plumb level and precise,” Black said.

Mingus Union’s Lucas Doerksen and Edgar Arreola, a student from Ed Options, each qualified for state in the carpentry competition. Doerksen finished sixth place at Holbrook, Arreola finished in seventh.

For Doerksen, it was his second SkillsUSA competition, but his first in carpentry. Last fall, Doerksen competed in masonry and according to Black “did very well.”

Besides taking a skills test that included a variety of welding and cutting, Schorr and White also took a written test and turned in a resume.

Though Schorr and White did not qualify for the state competition in welding, they will compete in leadership contest. Schorr is also in the running for a SkillsUSA state office.