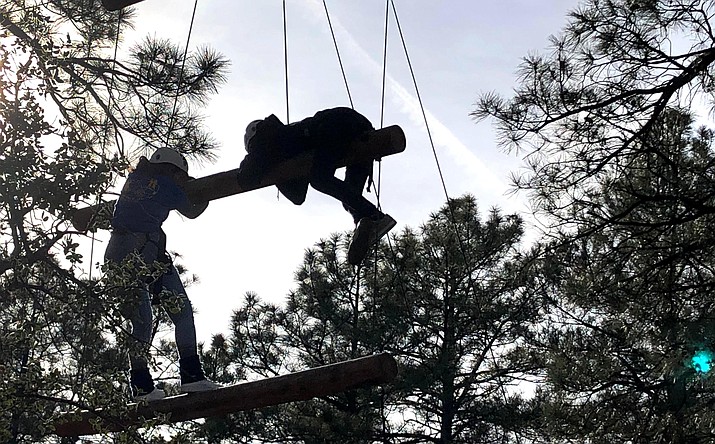 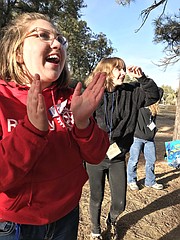 According to Eric Young, president of the Rotary Club of the Verde Valley, rotary “focuses on service in our community, internationally, and in this case, to our local youth.”

For close to 30 years, the Rotary Youth Leadership Awards – RYLA – have been sponsored by the Rotary Club of the Verde Valley. The Northern Arizona Rotary District conducts a four-day leadership camp for high school students each year at Camp Pinerock near Prescott, Young said.

At RYLA, students “gain confidence in themselves, learn many aspects of leadership, hear from renowned speakers, and meet and conduct teambuilding exercises with other participants and with Rotary District Exchange Students from other countries,” Young said.

“The camp gives them confidence, ability and skills to use as soon as they return back to their schools,” Young said. The Rotary Club of the Verde Valley “usually selects between four and six students each year.”

As youth liaison for Rotary Club of the Verde Valley, Tambrala Shurman said recently that “too often, our youth get a bum rap and get described as lazy and un-involved.”

“To meet an Interact student for just a brief few moments would change that perception,” Shurman said.

Serving as communications officer with Mingus Union’s Interact Club, Annette Davila said she learned at RYLA that “it is okay to trust people and ask for help.”

“In certain situations, you cannot reach your goal without having people or close friends to support you,” Davila said. “I still do not know what I want to do with my life, but I know that I will need help along the way and will not hesitate to ask for help and offer the same to everyone I can. I look forward to continuing my path alongside Rotary and am excited to be using the skills they have taught me.”

Interact Club is an affiliate of Rotary International. Mingus Union Interact student officers “run the weekly meeting and organize the calendar for our many events,” Bruchman said.

“They are the true stars of the show and deserve much recognition,” Bruchman said.

Selected by the state of Arizona to be junior counselors, Marette and King served as leaders at the January 2019 RYLA awards event.

Having attended her second consecutive RYLA event in 2019, Marette said that Rotary “has influenced my life tremendously.”

“I got the opportunity to lead a group of first year campers as a junior counselor,” Marette said. “I became very close with them, and I feel privileged to have gotten intimate glimpses into their lives. Not only have I learned how to face situations as a leader, but I have learned so much about myself.”

For Marette, learning about oneself is “one of the things that makes RYLA so unique.”

“Most people don’t find their passion until later in their life, but I’ve been blessed to discover mine: helping people,” Marette said. “As of right now, I want to work in a field that impacts people, specifically as a pediatric physical therapist or as a teacher. More people than you’d think don’t have a support system, and I would love to be that someone that people can reach out to.”

For King, the people who make up the Rotary Club of the Verde Valley are “some of the nicest people, always willing to help and always genuinely interested in what you have to say.”

Already planning to become a historical linguist, King learned as a junior counselor at the RYLA conference “how much you can help yourself – how to be true to yourself, how to speak in public, how to trust.”

“As a counselor, you learn how much you can help others,” King said. “How just listening to someone can change their life. How much someone can grow in just a few days. How we are not helpless in this world.”