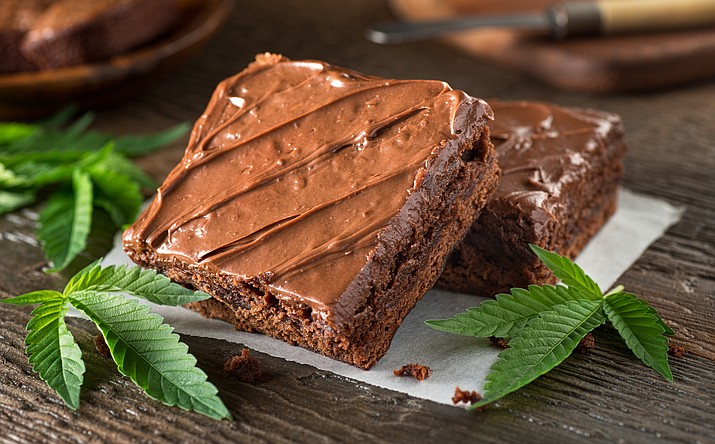 HB 2149 would spell out that the 2010 voter-approved law that allows marijuana to be used for medical purposes also legalized anything made from the resins. That can include something as simple as a tincture that a parent can give a child or more complex and commercial products like gummy bears and chocolate bars containing tetrahydrocannabinol, the psychoactive elements of marijuana. Adobe Stock Image

A House committee voted Wednesday to ensure that edible forms of marijuana remain legal in Arizona, no matter what the Arizona Supreme Court decides.

HB 2149 would spell out that the 2010 voter-approved law that allows marijuana to be used for medical purposes also legalized anything made from the resins. That can include something as simple as a tincture that a parent can give a child or more complex and commercial products like gummy bears and chocolate bars containing tetrahydrocannabinol, the psychoactive elements of marijuana.

The 5-2 vote by the House Committee on Public Safety came over the objections of Yavapai County Attorney Sheila Polk.

While she did not appear at the hearing, Polk submitted comments calling the proposal by Rep. Tony Rivero, R-Peoria, “very irresponsible.’’

“The potency level in THC extracts have reached unprecedented levels causing psychosis and harm to our most vulnerable,’’ she wrote. And Polk said the change in the law is “about profit, not medicine.’’

But Polk has her own interest in keeping the law the way it is -- and extracts of marijuana illegal.

It is her agency that successfully prosecuted a medical marijuana user for having 0.05 of an ounce of hashish.

And it is Polk who is asking the Arizona Supreme Court to uphold that conviction and uphold the current ban on extracts.

Rivero said it is that case and the plight of other medical marijuana users that got his attention. He said the bill simply codifies what he believes was the intent of voters in 2010 when they agreed to allow patients with certain medical conditions to use marijuana.

“Without this clarification some of Arizona’s most vulnerable patients such as children will no longer have access to alternative forms of medical marijuana needed to treat their debilitating conditions,’’ Rivero said. “We do not want patients to be forced to smoke marijuana or be subject to criminal penalties.’’

Jessica Crozier said that’s the choice she will face if the law isn’t clarified.

Crozier said her 15-year-old daughter has suffered from seizures for years, at one point running four to seven a day. Her neurologist suggested brain surgery.

“That wasn’t a path I was ready to take,’’ she told lawmakers.

More than five years ago she began providing a tincture of marijuana to her daughter, both to prevent seizures and help her recover after an incident. The result, said Crozier, is that her seizures are much fewer, with none in the last six months.

She worried about what would happen if the Supreme Court decides that the only legal form of the drug available to patients is to smoke it.

“Families like mine, we do not need the added stress of a legal issue when we’re already dealing with heavy medical issues on a daily basis,’’ Crozier said.

That legal issue surrounds the conviction and 2 1/2 year prison sentence of Rodney Jones.

Polk’s office charged -- and judges have so far upheld -- that the 2010 initiative legalized only the use of the marijuana plant by patients. The courts have said that, strictly speaking, hashish and other extracts of the plant fall under the separate category of cannabis, possession of which remains a felony.

It is that disparity that Rivero hopes to erase.

But Rep. Anthony Kern, R-Glendale, argued that the state should not be doing anything to ease the consumption of marijuana in any form, saying legalization of the drug in Colorado has created a “health crisis’’ there. And he sees no reason to ease restrictions on the sale of other commercial forms of the drug.

“It’s more for profit than it is for public health,’’ he said.

Rep. John Kavanagh, R-Fountain Hills, said his objections to this bill fall along the same line, saying that there no certified evidence by the U.S. Food and Drug Administration that marijuana has any legitimate medical uses at all.

But Rep. Kevin Payne, R-Peoria, said his colleagues are missing the point of the bill.

“We’re not legalizing anything that wasn’t already there,’’ he said, with voters already having made the decision to make marijuana legal for patients.

The measure, which now goes to the full House, comes as the state Supreme Court is set to hear arguments in less than a month on the question of whether forms of marijuana other than the flowers and leaves can be used by patients.

If the justices say all forms are legal, Rivero’s legislation would be unnecessary. It would become important, however, if the justices find that extracts are not authorized under the 2010 law. But that would not help Jones as anything the Legislature approves would be prospective only.