A river runs through it
What’s next for Verde River following destruction of dam, levy? 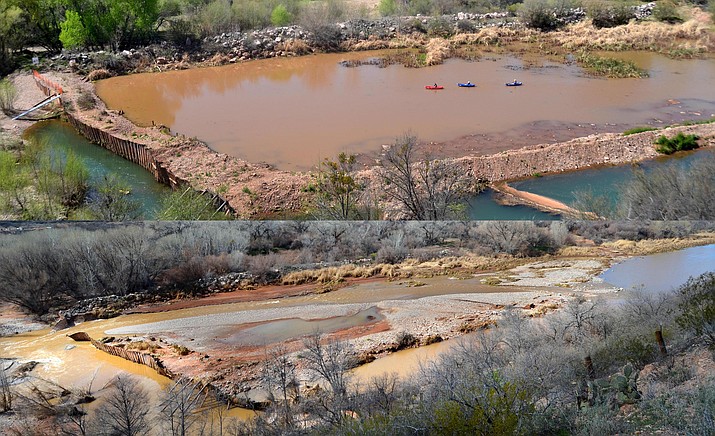 Years ago, a seven-tenths-of-a-mile pond was formed by a levy, or dirt dam, constructed in the Verde River, Von Gausig said. The pond is now gone and has been replaced by a narrow channel of water flowing through the breach in the dam

At the same time, the mayor said, Verde River water is not flowing into Pecks Lake. The river diversion historically runs through a culvert under Sycamore Canyon Road called Brewer’s Tunnel.

However, this time the main channel is farther west from Sycamore Canyon Road than it’s ever been before, and running through the dam instead of over it, he said. The river never has taken this current path, because the collapsed levy sent it farther west, or river-right, Von Gausig said.

Before the dam was built, the river meandered through the river’s natural flood plain. Pecks Lake was never a natural lake and if not fed with river water, especially in the dry months of summer, it will revert back to a wetlands fed by natural springs, Von Gausig said.

“There’s no water going into Pecks Lake from that head-gate now. It’s too low at the dam,” the mayor said

Freeport McMoRan, the owner of the Clarkdale dam, has historic water rights to feed Pecks Lake. Von Gausig said the company may desire to retain those rights.

“It is not uncommon for the diversion dam to require repairs as the result of significant flooding events similar to what occurred last weekend,” explained Freeport McMoran spokesman Jim Telle in an email Wednesday.

“With a forecast for additional precipitation this week, we are waiting until we can safely assess the damage and determine next steps,” Telle said, who added the company will keep Clarkdale officials apprised of its plans and activities.

It’s ultimately up to Freeport-McMoRan whether to rebuild the 250-foot-wide barrier or tear it down. Von Gausig estimated that about 65 feet of the dam was taken down by the flood.

The levee and pond were built years ago to push the river level higher because they were having trouble getting river water into Pecks Lake with the lower dam level, Von Gausig said.

“That whole levee is what blew out along with everything else here,” the mayor said. “All that gravel before the dam now used to be the levee.

“Every time there has been a major flood, there are parts of it (the steel dam) that bend down or sometimes even there are small gaps,” he continued. “Nothing like this that I have ever seen.”

Von Gausig said he has not been on the river, but wants to determine how deep the water is in the channel.

“That’s one of the things we are watching really carefully because we need to determine if there’s still a deep enough channel through that old pond area for kayaks to float.

“If it’s spread out over 300 feet, it’s going to be two inches deep.” Even though it’s flowing regular, Von Gausig added. “We’re hoping the river channelizes there to keep it deep enough for kayaks.”

The damaged dam is in the middle of the Town of Clarkdale’s commercial kayak program on the Verde River, which runs from the TAPCO launching area to the Tuzigoot parking lot.

Craig Walker, owner of South by Southwest Adventures, who ran 500 kayak tours down the Verde River last year, said this situation will keep him off the river until they can get out and test the situation.

Walker said the dam is getting closer to its normal flow numbers, but could not say if they could run the dam until he could look at it personally.

The kayak company owner said the flood actually flushed out a lot of the aquatic invasive species that had been growing in the levee pond and this may be better for the river as far as invasive species are concerned.

He estimated that he would try to get on the river at the end of February to check out the dam and river and start taking reservations on March 1 for river tours.

Von Gausig said even though Pecks Lake is not getting water from the Verde River right now, it’s not that serious in the winter. Eventually, the water in Peck’s Lake would have to be supplemented from another source, especially in the summer.

Von Gausig said the options for the mining company are to fix the dam and levee, drill a well under Pecks Lake, build a different kind of diversion dam on the Verde River or allow the lake to cease its dependence on Verde River water and become a wetland and marsh fed by underground springs.

In the early 1900s, Pecks Lakes was a wetland before it was turned into a lake by the United Verde Copper Co., Von Gausig said.

The lake has value to Freeport, Von Gausig said. It provides the claim and use for the water rights to draw from the Verde River at Brewers Tunnel at the Clarkdale dam.

Von Gausig said the Army Corp. of Engineers would not get involved with this dam breach because it is too small and is a grandfathered use.

A spokesman for the Arizona Department of Water Resources said the dam is not in its jurisdiction,

“We don’t have jurisdiction over that dam,” explained Sally Stewart Lee, public information officer at the Arizona Department of Water Resources.

Lee did not know if any government agency has responsibility for permitting or reviewing engineering for the dam.

“The Clarkdale dam does have ‘water-surface water rights’ to it, but it does not meet the criteria to be in our dam safety program,” she said,

Erin Jordan, public information officer for the Arizona Department of Environmental Quality that oversees the United Verde Soil Program soil removal program in Clarkdale, said she did not believe her department was working on the dam oversight either.

Von Gausig said because dams are obstacles in the middle of rivers, both the Verde River Institute and the Town of Clarkdale have held the position that the Verde should be an unobstructed free-flowing river.

The Friends of the Verde River does not have a position on the dam, said Nancy Steele, executive director.

“Friends doesn›t deal with the managers and owners of the ditches and diversion dams in any significant way,” she said.

Yavapai County Supervisor Randy Garrison said he did not know of any county permits or review process required by the county for dam reconstruction and river diversion work.