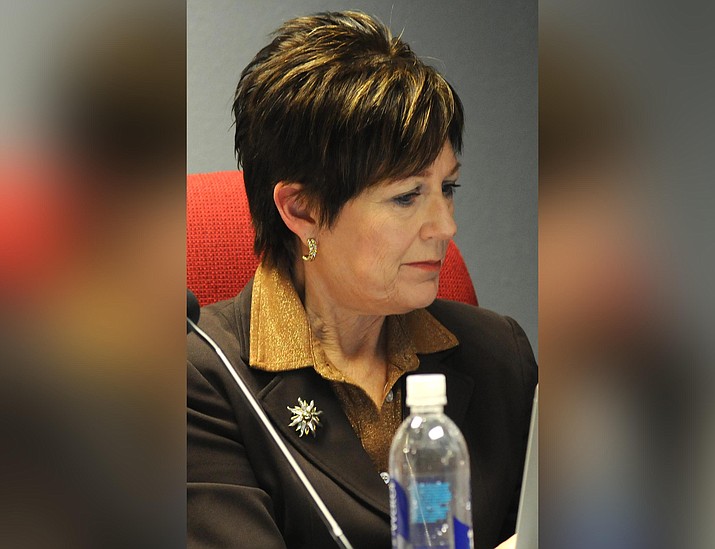 Rep. Nancy Barto R-Phoenix, the sponsor of all three bills, said she’s not necessarily opposed to vaccines. “These are not, in my view, anti-vaccine bills,’’ she said. “They are discussions about fundamental individual rights.’’ (Capitol Media Services 2019 file photo by Howard Fischer)

PHOENIX -- Arizona lawmakers approved three measures that foes said could result in fewer children being vaccinated even amid outbreaks of measles in pockets across the nation.

Members of the House Committee on Health and Human Services voted 5-4 along party lines to:

• requiring parents to be given extensive information about the risks of vaccines, including the multi-page inserts that are prepared for doctors, a list of the ingredients and how to file a claim for damages;

• expanding the exemptions available to parents who do not want their children to receive state-mandated vaccines and eliminating a requirement they review and sign a form that informs them of the risks;

• mandating that parents have the option of having their children tested first to see if they already have immunity.

The votes came over the objections from a string of doctors and other medical professionals who told lawmakers that the changes will undermine public health, at least in part by inundating parents with information that will only confuse them and cause them to have second thoughts.

“Any message you send today indicating a skepticism of vaccines harms the health of our community,’’ said Steven Brown, a Phoenix doctor. He said lawmakers should make decisions based on science.

“Childhood immunizations are the great public health accomplishment of the past hundred years,’’ he said.

And Steve Barclay representing the Arizona Medical Association said that success is reflected in the medical record, saying it’s rare to talk about measles or people dying from that disease.

In 1963, he said, before there were regular measles vaccines, Barclay said there were four million cases of the disease in this country, with 40,000 people hospitalizes and 500 deaths.

And in the rest of the world, where vaccines are not present, 89,000 people die each year.

“Think about polio, think about these other diseases we’ve eradicated,’’ Barclay said. “We’re worried about these things coming back.’’

Rep. Nancy Barto, R-Phoenix, the sponsor of all three, said she’s not necessarily opposed to vaccines.

“These are not, in my view, anti-vaccine bills,’’ she said. “They are discussions about fundamental individual rights.’’

But Thursday’s testimony was not evenly balanced, with Barto giving those who question the medical safety of vaccines two uninterrupted hours to make their case.

“Along with the premise that vaccines save millions of lives, as a pharmaceutical product they also bring risk,’’ Irene Pi, Arizona director of the National Vaccine Information Center told lawmakers.

“The risk is being negated, the risk is being ridiculed and ignored,’’ she said, saying that side of the story is not presented in the media is because “there is a echo chamber that’s part of a vortex of power’’ because “industry has captured the narrative.’’

Alan Palmer, a retired chiropractor, told lawmakers to ignore statements by medical professionals of the need to create “herd immunity,’’ where having enough people vaccinated ensures that diseases are not easily spread to others who, for medical reasons, cannot be immunized.

Some of the other testimony was more personal, like Pamela McLeod, a pediatric nurse whose two children have autism, though she noted that one developed the condition before getting his first shots.

“If parents want more information, give it to them,’’ McLeod told lawmakers.

“I’m not saying vaccines cause autism,’’ McLeod told lawmakers. “I’m just saying that there are questions and I would have just loved to be given the information that I could have made that choice.”

But Joseph Seelbaugh, a Phoenix family practitioner, told lawmakers those stories provide only one side of the issue.

“We didn’t have a chance to hear from patients and families of those who may have suffered from diseases that could have been presented,’’ he said. “We don’t hear from people that have vulnerable children that may not be able to get vaccinated who may be at risk from lower vaccination rates, infants that aren’t old enough to be vaccinated that may be exposed to higher rates of diseases like measles.’’

The votes also came against the backdrop of the Centers for Disease Control confirming 101 cases of measles from 10 states so far this year, largely among people who either have not had the vaccine or did not have the second dose.

Much of the objection Thursday was to HB 2471 and the list of what information that parents would need to be provided.

Liz McKenna, a physician who said she represents more than 900 members of the state chapter of the American Academy of Pediatrics, said no one is trying to hide information.

She said the materials now given to parents are “made to be in understandable language’’ spelling out in brief forms the risks and cautions. McKenna said HB 2471 would require parents to be given more than 30 pages of information for each vaccine that would not lead to improved patient care.

“In fact, providing this book without the proper context and without adequate explanation may confuse and intimidate parents, resulting in a drop in vaccination rates and adversely affect the health of the children of our state,’’ she said.

Barto, however, said the need for making more information available is underlined by the fact that the vaccines are mandated by state law.

It expands the religious exemption that now exists to cover children in all grades. That exemption is now permitted only for day care and preschool.

There already is a separate personal exemption that covers students through high school. But Cathi Herrod, president of the Center for Arizona Policy, said she believes the religious exemption is broader.

But what HB 2470 also would do is eliminate the requirement that parents who want the religious exemption must review and sign a form prepared by the Arizona Department of Health Services.

“Now somebody could just write on a napkin, ‘I’ve decided not to vaccinate my baby’ and put them in a child-care center,’’ said Rep. Kelli Butler, D-Paradise Valley.

What that also means is parents would no longer have to review and sign a form acknowledging that refusing to vaccinate can subject their children to specific risks.

For example, that form says the failure to immunize against measles can lead to pneumonia, seizures, brain damage and death. And it tells parents that if they refuse to provide polio shots that can result in paralysis, brain infections, permanent disability and death.

And that form that the legislation would make optional also makes clear to parents that if there is an outbreak their children can be kept out of school.

The third measure, HB 2472, would require health professionals to notify someone seeking a vaccination they can instead request a test to determine if they’re already immune to the disease. Barto said the idea is ensuring that children don’t become “over vaccinated.’’

But McKenna warned lawmakers that the test is not only expensive but also “very unreliable,’’ particularly for infants.