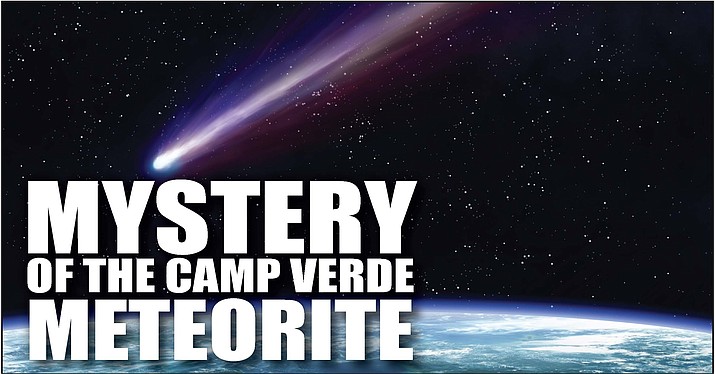 In the case of the Camp Verde meteorite, with its feather wrappings and the fact it was stored in the same manner as human remains, there can be little doubt it was held in reverence. Courtesy photo

George Dawson was no stranger to turning dirt.

A seasoned construction hand, he traveled extensively throughout Central America and the American southwest, moving mountains for money and, when time allowed, doing some digging on his own for both fun and profit.

In the spring of 1927, Dawson found himself between jobs. A Phoenix resident, he loaded his truck with supplies and tools of his trade, and headed north, hoping the fertile ground of the Verde Valley would surrender its ancient treasures.

Pothunters like Dawson knew the valley to be a steady source of income for anyone willing to turn over a few stones.

For this trip he chose a uniquely constructed ruin located on a windswept, five-acre mesa above West Clear Creek.

With a view of the entire valley, the outline of its crumbled walls looked more like a stockade than a home, a nearly square perimeter of rooms surrounding a common courtyard.

One day while searching through rubble in the northeast corner of one room, Dawson spied a familiar structure -- one that led him to believe it was going to be a good day -- a very good day.

The flat slab of sandstone at his feet, he knew to be the cover of a burial cyst, just the right size to contain the body of a child, along with whatever treasures the family had packed along for the afterlife.

Dawson slid the cover back and began clearing the accumulated dirt and debris. Eighteen inches down he uncovered a layer of feathers. As he gently scraped away he realized in was a blanket of feathers, wrapped about the cherished treasure.

An hour or so later, having cleared out all but the feather blanket and its contents, he reached in and gently lifted the bundle.

A second more forceful tug and Dawson realized it was not the lightweight body of the child he had expected.

With great difficulty, he wrestled the object from its grave, pulled back the delicate feather blanket and found himself gazing at a two-foot long, one-foot wide, five-inch thick, 135-pound, oddly-shaped hunk of rusting rock.

Dawson had an idea of what he was looking at, but it was not until several months later, after it was tested, that he knew for sure. The object so delicately wrapped and reverently placed in the stone cyst was a nickel-iron meteorite, or what meteorite collectors call simply, an iron.

To date, know one knows how it got there.

We do know that Dawson sold it in 1939 to one of the preeminent meteorite researchers and collectors of his day, Harold Harlow Nininger, who dubbed it the Camp Verde Meteorite. Convention dictated it be named for the closest post office or geological feature.

We also know that in 1959 Nininger sold the meteorite, along with more than 700 others, to Arizona State University, where it is currently housed in the school’s meteorite collection at ASU’s Center for Meteorite Studies.

What significance the object held to the souls who once lived on the five-acre mesa, we will likely never know. Archaeologists have uncovered feather blankets, and several meteorites, in archaeological digs. Dawson is the only one to have found both of them together.

A year after Dawson’s find, two pothunters discovered another meteorite in a stone cyst, or at least 40 to 50 pounds of fragments thereof, in a ruin east of Flagstaff. It became known as the Winona Meteorite and is now on display at the museum of Northern Arizona.

Other meteors have been located in ancient ruins of the Americas, as well as around the world, ranging in size from the three ounce Pojoaque meteorite, found in an ancient pottery bowl near Santa Fe, N.M., to the 3,407-pound Casas Grandes iron discovered in an Inca ruin near Chihuahua, Mexico.

As Peter Pilles, archaeologist for the Coconino National Forest, has observed, when archaeologists are uncertain about an object’s use or importance, they give it religious significance.

But in the case of the Camp Verde meteorite, with its feather wrappings and the fact it was stored in the same manner as human remains, there can be little doubt it was held in reverence.

Laurence Garvie, manager of meteorite collection at ASU, is a scientist both by nature and by training. But even he can’t help but speculate on the meteorite’s unusual shape and significance.

“It looks to me more like a child than a leaf or an arrowhead, as some have described it. It has a distinctive head and shoulders, and a very pronounced backbone that appears to have been rubbed smooth by human touch. And when struck it has a beautiful ringing sound,” Garvie says.

For scientists like Garvie, and the Center for Meteorites Studies founder and former director, Carleton Moore, the meteorite also poses some real world questions, not the least of which is where did it fall and how did it end up in the ruins of an ancient pueblo.

About 50,000 years ago, a 150-foot diameter, 300,000-ton, iron and nickel meteorite crashed into Canyon Diablo outside of modern-day Winslow, creating Meteor Crater. The impact vaporized at least half and scattered the remaining pieces across a wide area of the Colorado Plateau.

“The interesting thing about Camp Verde is that it does not look like the other Canyon Diablo irons,” Moore says. “Its chemistry, however, is identical. So the only conclusion we can make is that it is a piece of Canyon Diablo.

“But I have always had my doubts. The other great puzzle is also how did it get so far from Meteor Crater. The nomadic people who lived in Arizona didn’t lug these sorts of things around.”

Garvie and Moore both believe it is possible the Camp Verde meteorite was a fragment that separated from the main mass of the Canyon Diablo meteorite as it broke apart in the atmosphere, landing farther south.

As for the fate of the feather blanket, it was parceled out and lost. According to a correspondence from Dawson to Nininger, he (Dawson) gave away pieces of the blanket to collectors over the years.

It would seem possible that the entire story of the Camp Verde meteorite is pure fiction, dreamt up by Dawson to make an otherwise common iron meteorite more valuable, were it not for statements in a narrative Nininger later wrote.

Nininger notes he never heard the story of the meteorite’s discovery until he came to Phoenix to make the purchase. There is also the fact that he bought it for what he described as no more than “the price usually paid for Canyon Diablo irons ($0.50 per pound).”

Lastly, in April 1940, at Nininger’s request, Dawson brought him to Camp Verde to see the pueblo and search for feathers or the remains of the cyst.

“We hunted the long line of obscure ruins until he reached the crumbled walls of a small room, in the corner of which was a slight depression and several flat stones protruding from the drifted dust and debris.

“Digging out the filling of dust and weeds failed to reveal a shred of the feather cloth wrapping, but this was hardly surprising...We gathered the flat stones and made several trips down the steep slope to the car and back again,” Nininger states.

The ancient owners of the Camp Verde meteorite may or may not have lugged it around in their travels, but Nininger did. For seven years following its purchase, he continued to search the planet for what had fallen from the heavens.

Then in 1946, he quit the road and established the American Meteorite Museum on Route 66 near Meteor Crater, where it went on public display.

In 1953, after America abandoned Route 66, Nininger moved his collection to Sedona, where it was put on display in the Verde Valley.

What was originally found by Nininger at the John Day Ruin, the Camp Verde Meteorite now sits at Arizona State University’s Center for Meteorite Studies.

The Meteorite has been back at ASU since late-2015, after a short visit at the Verde Valley Archaeology Center – in Camp Verde.

From March 1 through Aug. 31, 2015, the meteorite was on display in its namesake community, a “significant milestone for the center,” said Ken Zoll, executive director of the Verde Valley Archaeology Center.

When the Archaeology Center welcomed the Camp Verde Meteorite back home in 2015, Dr. Laurence Garvie, curator of the Center for Meteorite Studies Collection, delivered opening remarks at the Philip England Center for Performing Arts in Camp Verde.

Zoll also said that the Camp Verde Meteorite was the “first artifact loaned to the Archaeology Center by another institution.”