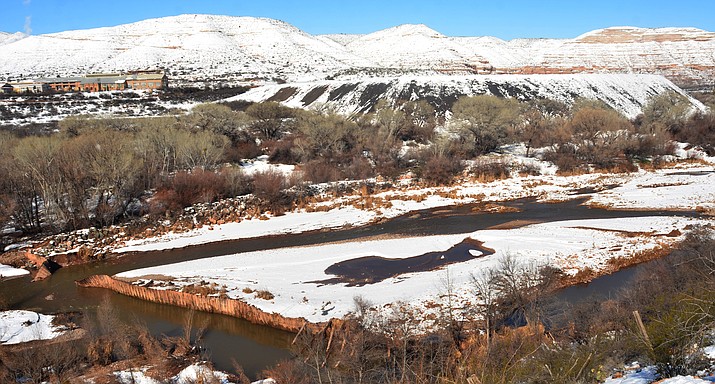 Freeport-McMoRan will remove the entire 300-foot dam and the river will be allowed to return to its natural condition, Mayor Doug Von Gausig confirmed Tuesday night. VVN/Vyto Starinskas

CLARKDALE -- Freeport-McMoRan informed the Town of Clarkdale that the company will remove the 105-year-old Clarkdale dam on the Verde River after a storm breached about 60 feet of the dam two weeks ago.

Freeport-McMoRan will remove the entire 300-foot dam and the river will be allowed to return to its natural condition, Mayor Doug Von Gausig confirmed Tuesday night.

“Due to the significant damage that resulted from recent storms to its water diversion structure along the Verde River near Clarkdale,” explained a Freeport statement Wednesday, “Freeport Minerals Corporation will work with local, state, tribal and federal entities with the goal to remove the diversion structure and establish an alternative point of diversion in order to protect and maintain the company’s long-standing water rights.”

Freeport McMoRan, the owner of the Clarkdale dam, has historic water rights to feed Pecks Lake.

Freeport indicated the company will continue to put water into Peck’s Lake, Von Gausig said, but the company will change where they will get that water from. It will come from near there, but it won’t be from a dam diversion, he added.

In the company statement, Freeport could not estimate the time it would take to remove the dam structure, and “establishment of an alternate point of diversion.”

It will take time and work by Freeport Minerals Corp. engineers and other entities to determine how Peck’s Lake will be fed with water in the future, explained Freeport spokesman James Telle Wednesday.

Flooding on the Verde River in Clarkdale knocked out part of the 105-year-old dam two weeks ago. Flood waters also destroyed a seven-tenths-of-a-mile pond levy that helped divert water to Pecks Lake, which is on the company’s private property.

Von Gausig said Freeport McMorRan called him and Town Clerk Gayle Mabery Tuesday to inform them that the dam would be removed.

Von Gausig said it was really good news and it will change the eco-system of the river in a major way.

“I am beside myself, really,” Von Gausig said, who is also the executive director of the Verde River Institute. “This is the best thing that’s happened to the Verde River that I know of.

“This is something that if you had asked me 15 years ago: What single thing would you like to have happen to the Verde River? It would have been: I would like this dam to disappear.”

The removal of the dam will result in a much more healthy river, the mayor said.

This will now create a good habitat for native fish, insects and animals and will help to reverse the problem of non-native fish and aquatic invasive species that were taking over the pond and creating problems for kayakers.

The dam also negatively impacts kayaking on the Clarkdale’s Verde River permit program, which runs from the TAPCO launching area to the Tuzigoot parking lot. It was dangerous to have kayakers getting out to avoid the rough metal dam at that location, he said.

Now kayakers will flow right through that area. Craig Walker of South by Southwest Adventures, who provides over 500 permitted tours on this river stretch, said he plans to run the river and dam in the next few days because he has booked tours for March and needs to make sure it’s passable.

Von Gausig said Freeport-McMoRan is working with the Army Corp of Engineers to make sure everything is permitted correctly.

The Verde River Institute is monitoring the damage from the dam breach, which is already beginning to “reform the river,” said Von Gausig.

The main channel is farther west from Sycamore Canyon Road than it’s ever been before, and running through the dam instead of over it, he said. The river never has taken this current path, because the collapsed levy sent it farther west, or river-right, Von Gausig said.

Before the dam was built, the river meandered through the river’s natural flood plain. Pecks Lake was never a natural lake and if not fed with river water, especially in the dry months of summer, it would revert back to a wetlands fed by natural springs, Von Gausig said.