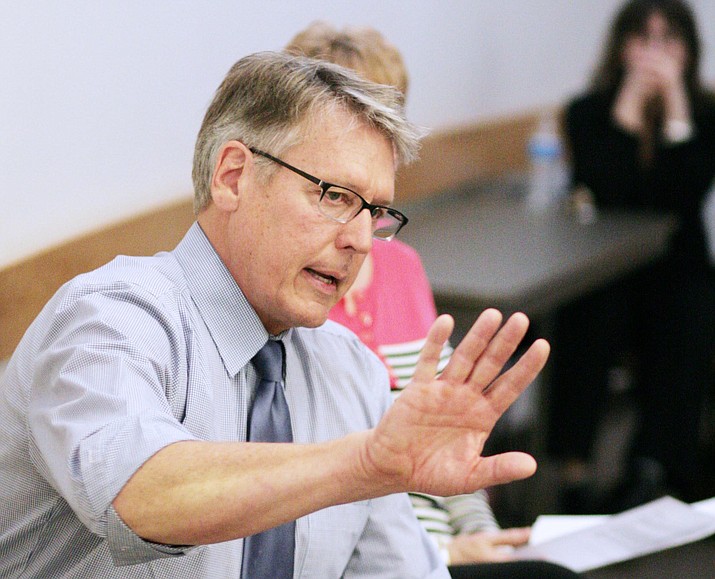 At one point in 2018, it seemed that consolidation would go to the voters on Nov. 6. Until the Mingus Union School District filed a lawsuit in mid-July that claimed, among other things, petitions circulated by the pro-consolidation group Committee for Better Upper Verde Valley Schools 2018 contained language “designed to confuse and mislead petition signers.”

“The one thing that I do regret is that the community did not get to have their vote heard in the fall election as they had been preparing to do for over a year,” said longtime Cottonwood-Oak School Board member Jason Finger, whose seat on the C-OC board expires on Dec. 31.

Though the lawsuit was dismissed, Yavapai County Superior Court Judge David Mackey’s stipulated judgment essentially sent both parties back to the drawing board, where legal teams for the school district and the committee constructed new petition language and a stipulated checklist approved by Mackey’s court on Oct. 5 “for the purpose of calling an election on Nov. 5, 2019.”

Mackey also ordered that res judicata prevents the parties – which includes the plaintiffs and defendants – from litigating, “and plaintiffs shall not seek to litigate, issues in the future that have been raised or could have been raised in this pre-election case including but not limited to the constitutionality of Arizona Revised Statute 15-459 (B) (7), any alleged conflict between A.R.S. 15-459 (B) (7) and A.R.S. 15-448, the form of petition, and the petition’s language agreed upon by the parties and the court.”

But the parties are “free to make public statements and litigate any issues not precluded by res judicata or this judgment.”

Mackey further ordered that there is “no just reason for delay, [and that] there are no further matters that remain pending.”

The subject of school district consolidation has been a hot topic since February 2017 when former Mingus Union School Board member Andy Groseta first told the three districts they needed to consolidate because more than $1 million saved from administrative redundancies would go into the classroom.

In December 2017, the Cottonwood-Oak Creek School Board voted to tell Yavapai County School Superintendent Tim Carter’s office that consolidation should go to the voters.

For much of 2018, Mingus Union School Board members said would not say yes or no to telling Carter’s office the same. “It’s about informed decision making,” Steve Gesell said in October.

Leonard and Snyder estimated that it would cost roughly $148,000 per-year to even out the wages of a merged districts’ classified staff, and about $650,000 per-year to equalize teacher salaries.

These numbers are in sharp contrast with the “over $1 million in cost savings” the Andy Groseta group has stated since February 2017 “could be re-allocated back into the classroom” should the two districts merge.

With one group claiming an annual savings and another group claiming an additional cost each year, the Advisory Committee for Consolidation was able to agree where to meet and why to meet, but committee members from both the Cottonwood-Oak Creek and the Mingus Union contingent couldn’t even agree on a closing statement.

“It is incumbent on both school boards to identify, use and maximize any efficiencies available,” said Dan Mabery, who chaired the consolidation committee in its sixth months of meetings.

Consolidation, he said, “is probably one” of those ways to be more efficient.

To Jason Finger, the consolidation debate is “very time consuming for all parties involved.”

“The right thing to do in looking forward is for Mingus Union to call for the election, as Cottonwood-Oak Creek has already done in November 2018, in advance of a planned petition drive,” Finger said. “In doing so, the districts demonstrate that they are listening to their constituents who have been asking for their chance to vote on this issue, while also offering plenty of time to educate the public in advance of that vote, on their respective positions.”

What they said about consolidation in 2018

The following are quotes from the main players in consolidation talks between the Cottonwood-Oak Creek and Mingus Union school districts.

“What we need to do now is look at semi-concrete numbers. We want to make this an educated decision. This feels more emotional than logical.”

--Micah Swenson, member of the Advisory Committee for Consolidation and eighth grade teacher in the Cottonwood-Oak Creek School District

“We keep saying we haven’t come to any conclusions. I think the committee has been a good thing, even though it’s been a bit contentious at times. That’s part of the debate. That’s healthy. We all want the best schools in the Verde Valley.”

“I personally feel like we have the expertise that the two boards and the business managers could give us the information we need. I honestly believe that.”

“The Advisory Committee for Consolidation has made “some progress, but [we] still need more information.” “The fact that we still have questions means we aren’t done.”

“My opinion of consolidation/unification is for district savings, although that does not seem to be the case in this situation. The funding our schools receive is the most important factor in providing an education to our students. “It is not the money that is important; it is what it provides that is.”

“I am not going to support the report given to Sen. Allen but as surprised as I was about the report, I am not going to condemn it either. I think our goal is to get out to the public as much useful information as we can. To that end, I do think though that it is important for the public to understand, what was the ultimate purpose of the Mingus meeting with Sen. Allen?”

“This could and should be done without freezing the Mingus teachers’” salaries. If you freeze Mingus salaries, that wouldn’t work. You’d probably have to hire a lot of new people.”

“When I saw the report, I went from surprised to furious. I, as well as the rest of the committee, have spent months looking for answers to the consolidation question. We then find that two or three members bypassed the committee and created their own report on our behalf and submitted it to Senator Allen.”

--Sonny Zale, in his resignation letter to the Advisory Committee for Consolidation

“After much research, we still stand behind our analysis resulting in over $1 million in cost savings that could be re-allocated back into the classroom.”