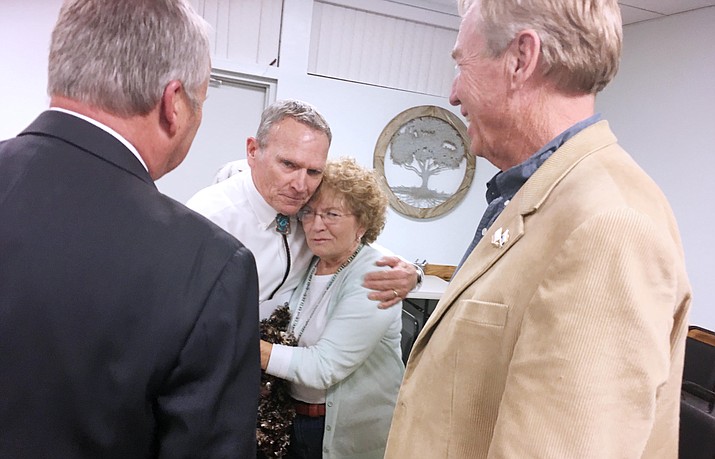 CAMP VERDE – It was back in March of 1987 when Jackie Baker first ran for a spot on Camp Verde’s town council.

Had Baker won that election, she would have been part of the then-newly incorporated community’s first governmental body.

Maybe it took a long time – 12 years – before Baker was first elected to the town’s council.

But from 1999 until this last November, Baker spent more time on council than off council.

Only one year – 2008 – saw a Camp Verde council without Baker as one of its seven decision makers.

But Baker, who unsuccessfully challenged incumbent Charlie German for a seat as mayor, will not be on council in 2019, as she and Brad Gordon were replaced by political newcomer Bill LeBeau and retired judge Joe Butner.

Following the November election, Baker said that her mayoral campaign was a “very positive experience.”

“Listening to people, visiting with people as they voiced their ideas,” Baker said.

German, who won the General Election by more than 300 votes, said that Baker “ran a good candidacy.”

“I’m glad that Jackie stepped up and ran,” German said. “We could sit next to each other and have fun. That’s refreshing, in a lot of cases today.”

Robin Whatley, who was first elected to council in 2009, retained her seat in the November election. She, LeBeau and Butner received more votes than challengers and former council members Carol German and Bruce George.

Russ Martin has been Camp Verde’s Town Manager since August 2010.

But he’s only been under contract since June.

Thanks to council’s 5-to-1 vote, Martin signed a five-year contract that starts at $127K and "may be increased or decreased each year ... by the same cost of living increase or decrease factor as applicable to all Town employees," according to the contract."

"There are two ways to adjust salary, COLA (Cost of Living) and pay increases," Camp Verde Vice Mayor Dee Jenkins said. "Both must be approved by council.

Though either side can opt out of the deal, Martin said the contract illustrates a “mutual” desire to stay in Camp Verde.

“I did not bring up the conversation,” Martin said earlier this year. “Not that I plan to go anywhere, but it would sent a good precedence for a future manager. And it does invite, attract quality candidates.”

In previous Town Manager jobs going back to his time in Colorado, Martin said he had worked under contract. During discussions, then Camp Verde councilor Brad Gordon said that a town manager not under contract “seems to lend itself to uncertainty.”

“Just like anyone else, people might feel more secure with a contract,” Gordon said earlier this year. “So I think we should look at it. We’re going to see what the pros and cons are.”

Camp Verde Promotions announced this year that after the March 2019 Pecan and Wine Festival, it would no longer be the Town’s entertainment committee.

In October, council voted to approve a memorandum of understanding with Camp Verde Promotions that in effect means the Town is again in charge of Fort Verde Days and the Spring Heritage Pecan and Wine Festival.

And Cornfest – in some sort of incarnation.

Cornfest would be the smallest of Camp Verde’s three signature events, ‘probably a one-day event,” Marshall said before council’s vote. “Not sure what it would look like, but it will be easier going forward. We’re always going to need community involvement to make these events run.”

Whiskey’s for drinking, water’s for fighting over. That’s what they say in the desert.

Earlier this year, the Town of Camp Verde tried to acquire the Camp Verde Water System, but announced in August that their $6.5 million offer was not acceptable.

“It appears that the Town cannot afford to acquire the [Camp Verde Water System] assets,” company President Stanley Bullard wrote in a letter to Martin. “I believe that it is in the best interest of CVWS to terminate consideration of the LOI (Letter of Interest).”

In December, council met in executive session to again discuss the water company, an opportunity for what Martin said was to “rehash, to effectively bring council up to speed.”

Though no longer on council, Brad Gordon said recently that a purchase of the Camp Verde Water System would be “much needed for our future.”

As mayor of Camp Verde, Charlie German has one vote “as a member of a body of seven policy makers.”

With two new council members in Camp Verde for 2019, German said this week that the town has “many challenges, concerns and a host of opportunities.”

“I expect the council to give their very best to bring forward policies, budgeting and planning which will take Camp Verde on into the future providing additional economic stability and life style opportunities consistent will our community’s wishes,” he said.