New president, board member for Yavapai College in 2019 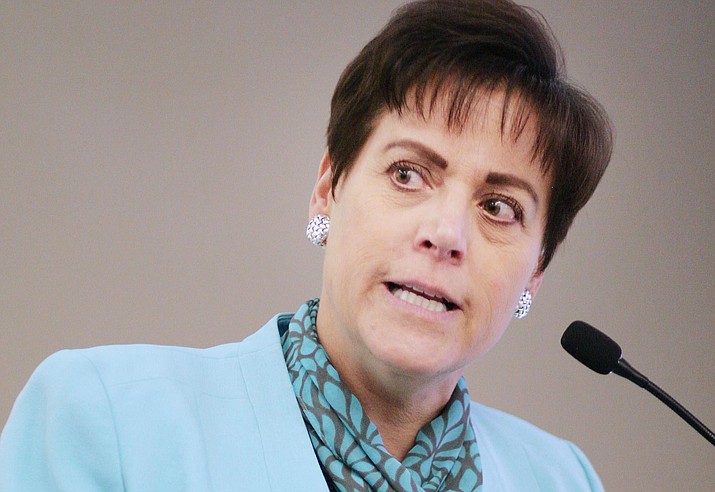 CLARKDALE – From 77 candidates to seven to three finalists to one, Yavapai College’s district governing board unanimously selected Lisa Rhine to replace Penny Wills, whose last day with the college was Dec. 31.

The college’s 10th president, Rhine has three decades of post-secondary experience as she leaves Virginia’s Tidewater Community College, where she served as Provost and Chief Operating Officer of the college’s Chesapeake Campus.

“There’s a lot of bureaucracy in Virginia,” Rhine said at a December meet-and-greet at Yavapai. “I’m excited about this opportunity.”

Deb McCasland, the college’s District 2 Representative, said this week that she “look[s] forward to working with our new president, to increase our educational opportunities for all of our Yavapai County students without increasing the cost to our taxpayers.”

For Wills, who decided to become an educator at age 18, she knew when she arrived in 2011 that Yavapai College “had to develop an empowering relationship with our community.”

According to James Perey, the college’s executive dean of the College’s Verde campus, Wills has “made a significant impact on students, faculty, staff and the community” as the college’s president the past seven years.

“I wish Dr. Wills all the best as she closes one chapter of her life and begins another,” Perey said earlier this year. “I can imagine the decision to retire is not an easy one, as she took great pleasure and joy in helping students achieve their educational goals.”

In the Nov. 6 General Election, Paul Chevalier defeated incumbent Connie Harris to claim the District 3 seat on the college’s governing board.

The election of Chevalier was “definitely a highlight of 2018,” McCasland said.

“Once again we have a courageous fighter to represent the needs and concerns of the Verde Valley residents,” she said.

McCasland cited Chevalier’s “extensive knowledge of the college gained during his tenure as the Verde Valley Board Advisory Committee chair” which she said “will serve as a base from which to work in addressing the long term neglect of the Verde Campus and educational needs of our students.”

Harris, who lost the November election by more than 1,000 votes, was appointed in 2016 to replace former District 3 Representative Al Filardo, who resigned following the dismantling of the Verde Valley Board Advisory Committee.

In the board’s other 2018 election, incumbent Ray Sigafoos defeated challenger Wayne Meddaugh in the District 1 race.

McCasland said that Meddaugh “would have brought an honest and ethical vision to the college board.”

Thanks to a partnership that began seven years ago with the Cottonwood-Oak Creek and Mingus Union school districts, the Gear Up program was implemented to better expose young people to their post-secondary opportunities.

Gear Up started in the community’s middle schools, as students would prepare for college beginning in the seventh grade.

This year, Yavapai College started the fall 2018 semester with 162 Gear Up kids, with 151 of them from the Verde Valley, the rest from Prescott area schools, according to Meghan Paquette, the college’s Gear Up success adviser.

Now halfway in to the 2018-2019 school year, the college’s executive dean of Yavapai College’s Verde campus said recently that the Gear Up grant “has been very successful, with 187 students participating overall, 133 completing the 18-19 application for financial aid.”

As director of Mingus Union’s Student Services, Gretchen Wesbrock said that the strength of the Gear Up program is the relationships.

“Gear Up is designed to get the under-represented kids into college successfully,” Wesbrock said in August. “It’s priceless. Yavapai College is a model of what this is supposed to look like.”