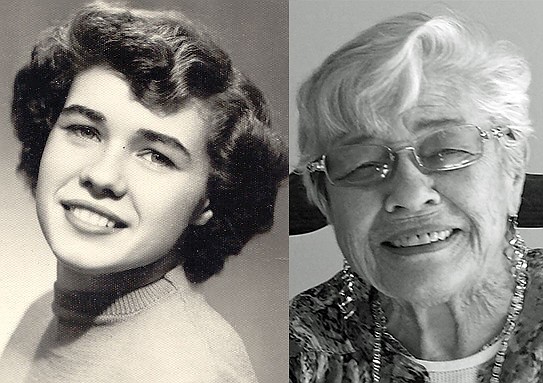 Mom was born June 10, 1931, in Anacortes, Washington, to Robert and Catherine Bushey and was a graduate of Everett High School.

She met our father, Andy, while both were working at Alaska Airlines; they married on June 14, 1952.

Our family moved to Southern California in 1962, eventually settling in Canyon Country.

In addition to raising three children, Mom worked for the Chamber of Commerce and the Los Angeles Public Library System. Other interests and hobbies were reading, playing cards, painting, ceramics, quilting, singing with Sweet Adelines and square dancing with the Jubileers.


Mom and Dad returned to Washington State in 1974 living in several cities, including Bellevue, Marysville and Everett. She also worked for the Snohomish County Library System’s book mobile program.

After retirement in 1993, Mom and Dad settled in Cottonwood, in the Pine Shadows Mobile Home Park. They actively participated in clubhouse activities and worked as volunteers at Verde Valley Hospital.

Mom was an avid reader and always had a book within easy access. She had a great love for animals and was an avid supporter of the ASPCA and Best Friends Animal Rescue. Our parents spent summers traveling to many states, as well as Canada, in their 5th-wheel trailer, visiting relatives and friends.


After Dad passed away in 2013, mom moved in with our sister, Cyndi, who also lives in Pine Shadows. We are grateful to her for providing both physical and emotional support for the past several years.

She was preceded in death by her parents; brother, Mike Bushey; and husband, Arnold (Andy) W. Anderson; and two great-grandchildren.

A memorial service will be held in the spring for family members. Contributions may be made to the charity of your choice.