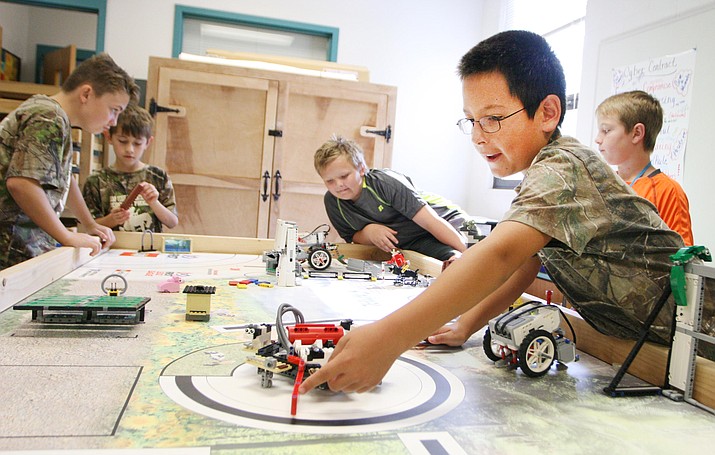 Peggy Dickey said that robotics, pictured, has been a popular program since the beginning of Camp Verde Unified’s Friday Camps programs. VVN/Bill Helm

CAMP VERDE – If Camp Verde Unified is not able to raise another dime this year for its Friday Camps, the total outlay for the district to keep inquiring minds on campus for a fifth day would be about $23,000.

That’s what Danny Howe, the district’s administrator-in-charge said following a presentation from Friday Camp’s Coordinator Peggy Dickey to the district’s governing board.

“There’s a lot of good with what’s been going on,” Howe said of the program that has more than 100 students on campus most Fridays from 8 a.m. until noon.

That $23,000 Dickey said represents money the program looks to subsidize with grants, as her goal to start the year was to be self-sustaining.

Dickey said that the Camp Verde School Board members “need to weigh out the costs versus benefits like they do with all programs the district offers.”

“They are just doing their due diligence,” Dickey said. “We are only half way through the year and we are all hoping for some more grant money to come in.”

Dickey’s presentation Tuesday was not all about money.

“In addition to talking about the cost of Friday Camps, I needed to make sure the board understood the benefits being provided to Friday Camps students and the district,” Dickey said. “It is in the district’s mission statement that they want to establish connections with local communities. Friday Camps has been doing that in many ways by connecting with numerous organizations and creating student adventures outside of the classroom.”

Which makes learning “fun for children and connects the community with the students and our district,” Dickey said.

Thanks to a collaboration with the Verde Valley Cyclist Coalition, Dickey said that the school’s Bikes for Kids program is “really cool because our students are learning basic mountain biking skills outdoors.”

Other programs this year for Friday Camps include youth engineering courses such as python computer programming, electronics technology and robotics.

Due to budget constraints, the school’s Friday Camps “have to stick with the six-week quarters.”

“We had to cut some sports programs in first and second quarter which affected our attendance,” said Dickey, who was able to add basketball to the program’s third quarter offerings along with mountain biking “so we’ll see if that affects enrollment numbers positively.”

Camp Verde Unified’s Friday Camps are from 8 a.m. until noon on most Fridays, excluding some holiday weekends.

Sessions are from 8 a.m. until 10 a.m. and from 10 a.m. until noon. Cost is $20 to participate in the six-week program, with 50-percent academic scholarships available for any student earning all A’s and B’s.

Any student enrolled in the Camp Verde Unified School District can participate in Friday Camps.