Special K: Despite skepticism, Cardinals believe they have winner in Kliff Kingsbury 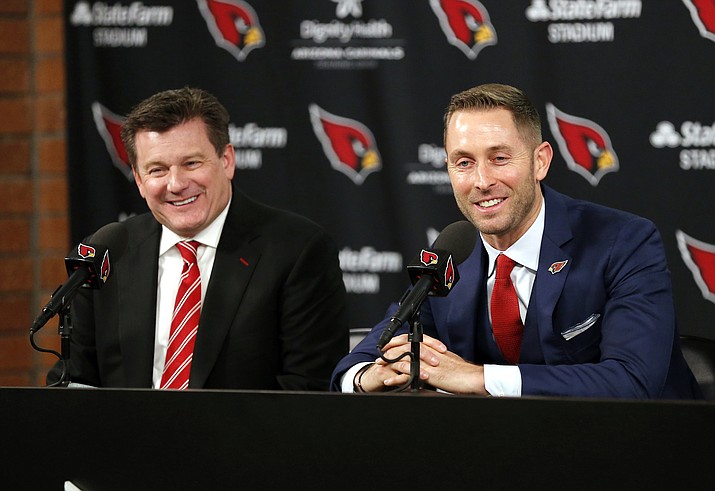 TEMPE — After making one of the more divisive hirings of the NFL offseason, the Arizona Cardinals introduced Kliff Kingsbury as their new coach Wednesday. He succeeds Steve Wilkes, who was fired in December after only a year in charge.

Under Wilkes, the Cardinals finished 3-13 with the NFL’s worst-ranked offense and 20th-ranked defense.

“We wanted to hire a great offensive mind.” owner Michael Bidwill said. “The one name that kept coming back to us over and over as one of the most innovative, bright minds as an offensive play-caller is Kliff Kingsbury.”

A highly regarded offensive guru in the college coaching world, Kingsbury previously had agreed to be the offensive coordinator at USC just 10 days after getting fired from his head coaching job at Texas Tech. At the helm of the Red Raiders, Kingsbury amassed a 35-40 career record, only finishing above .500 twice in six seasons.

Shortly after agreeing to join Clay Helton’s Trojans staff, Kingsbury’s name started circulating for several of the vacant NFL head coaching jobs. Ultimately, the Cardinals were able to lure Kingsbury from the Trojans, buying out his contract for a reported $150,000.

“It’s been a whirlwind, I’ll just say that,” Kingsbury said. “When I took the job at USC I couldn’t be more thrilled to have that job. With coach Helton, (athletic director Lynn) Swann, that program, that tradition, but this is an opportunity I couldn’t pass up.”

The move sparked controversy on multiple fronts. Many questioned Kingsbury’s professionalism and commitment, suggesting he shouldn’t have taken the USC job if the NFL had always been his plan.

The other part of the controversy comes from Kingsbury’s lack of both NFL experience and overall coaching success. Kingsbury’s tenure at Texas Tech was up and down. He had high-powered offenses but lackluster defenses.

“Did I miss something? … The man didn’t even have a .500 record at Texas Tech,” ESPN host Steven A. Smith said.

Kingsbury is aware that he has critics but is prepared for the work ahead.

“There’s nothing I can say today that’s going to change that,” Kingsbury said. “It’s about the work that started yesterday and what we do from this point forward.”

Others, however, approve of the hiring, including Stewart Mandel, editor-in-chief of The Athletic College Football.

“I understand why he would be coveted,” Mandel said. When you look at this past season in the NFL, the two most exciting players, (quarterbacks) Patrick Mahomes and Baker Mayfield, he coached. He’s one of the preeminent minds of the air-raid offense, besides Mike Leach who invented it.”

His reputation as the architect of some of the more prolific offenses in college football in recent year gave Bidwill and Cardinals general manager Steve Keim the confidence to hire him.

“When you look at the output of his offenses, it’s really impressive,” Bidwill said. “ Offense overall is the direction this league has gone. We felt it was important to get somebody who had tremendous success and experience (calling plays).”

At 39, Kingsbury will be one of the youngest head coaches in the NFL. The Cardinals signed him to a four-year deal with a team option for the fifth.

‘He got a bad rap’: Friends, NFL executives remember Bill Bidwill’s humble, caring side
Ortiz wins Arizona Cardinals coach of the week award
"He was who we thought he was"
Cardinals camp opens in Flagstaff
‘Deeply problematic’: Cardinals criticized for promoting Bidwill’s support of SCOTUS nominee
Event Calendar