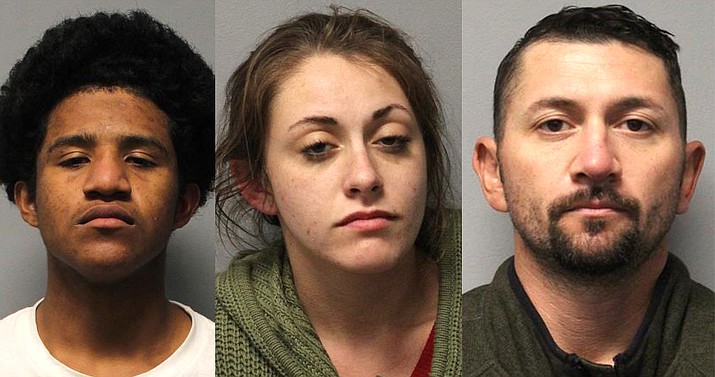 COTTONWOOD -- A citizen who noticed "suspicious activity" behind the Home Depot in Cottonwood led to the arrest of three felony suspects Tuesday morning.

“ The citizen was also able to provide the area the suspects fled to,” said Cottonwood Police Sgt. Monica Kuhlt.

That information resulted in a search warrant being served at an apartment in the 1700 block of East Elm Street.

Baldwin and Loveless were in possession of a stolen 2003 BMW from Tempe.

Additionally, they were charged with possession of dangerous drugs for sale, theft of means of transportation, theft, possession of marijuana and drug paraphernalia.

Baldwin was also charged with taking the identity of another person. She had a local misdemeanor warrant.

Both were booked into the Yavapai County Jail. These were all felony charges for Baldwin and Loveless except for the misdemeanor warrant on Baldwin.

Later that day, Yavapai Apache Tribal Police located and apprehended 20-year-old Antwon Marshall Tyrone Gyce, who was also wanted in connection with this investigation and in connection to a stolen vehicle from the Cottonwood area in December.

Kuhlt said the citizen who helped Cottonwood PD in the investigation will be recognized at the Tuesday, Feb. 5 Cottonwood City Council meeting.