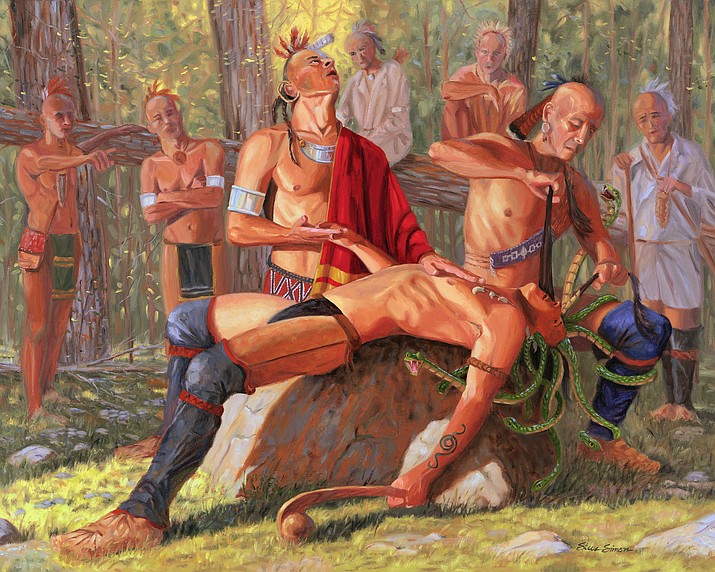 Start the new year by celebrating the work of prolific painter Steve Simon, who has created 40 portraits capturing the Great Peacemakers of our time, each portrait displayed with the story of these inspirational figures. 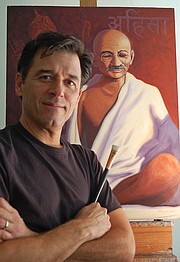 The exhibit will run through the end of April at Sedona City Hall, 102 Roadrunner Drive.

The public is invited to meet Simon at a reception Jan. 17, 4-6 p.m., in the City Council Chambers. Performing at the reception will be Michael Kollwitz playing his unique musical instrument, the Chapman Stick.

Simon is the son of immigrant parents from Luxembourg. His late father Steve Sr. survived the Nazi concentration camps and in a series of nightly chats recounted everything he could remember about those dark days to his then 12-year-old son who then presented the story to his 6th grade class. “Those chats impacted me in ways that still resonate with me powerfully to this day,” explains Simon. “I knew I wanted to leave the world a more peaceful place.”

The genesis of the Great Peacemakers project was in 2013 when the iconic freedom fighter Nelson Mandela gripped the world’s attention, not through his powerful will to produce change, but rather because of his failing health.

On the other side of the world an artist wondered why he did not know more about such a luminary. “Sure, I knew who Mandela was and broadly what he did,” says Simon, “but I didn’t really understand. That humbling ignorance ended up being my moment of inspiration.”

During the overthrow of apartheid in South Africa Simon had been enrolled in an international MBA program. In the early 1990s the spread of liberal capitalism had become the rallying cry for an economically interdependent, peaceful world and Simon wanted to catch that wave.

One of 50 students from twenty-five countries, Simon traveled the globe studying regional socio-economic and political conditions as they pertained to international business. “Strangely, never once did we discuss apartheid or Nelson Mandela,” Simon says. With no experience painting portraits or figurative work, he began to pursue his new muse. Simon studied and painted 40 historical peacemakers in all.

Among the remarkably consequential peacemakers Simon has studied but whom few have heard is Deganawidah. Referred to by the Iroquois simply as the Great Peacemaker, this figure united the five warring nations of the Iroquois into the world’s first democratic confederation. Simon’s painting depicts the Great Peacemaker figuratively straightening the seven crooked places in the body of a chief who served as an obstacle to peace while Hiawatha combs the snakes from the wicked chief’s hair.

Deganawidah’s Great Law of Peace would eventually influence our own nation’s founding fathers in establishing their own confederation of colonies, and the U.S. Constitution would incorporate many aspects of this Law. Interestingly, the surviving democracy of the Iroquois does not rely on the competition of majority rule but rather on a shared consensus. a lesson Simon finds particularly intriguing given our nation’s current state of political polarity.

The paintings being exhibited at Sedona City Hall will not be sold individually. Simon is seeking a single buyer and a venue to permanently exhibit the complete collection. In addition to the original artwork, the artist is creating a traveling exhibit of banners featuring the art.

When asked if there is one concept that is most important for visitors to take from the exhibit Simon points to his painting of Nelson Mandela. He is allegorically depicted carving a wood sculpture of the African continent. At the base of the sculpture, the word “ubuntu” is shown carved into the wood. “Virtually all of the peacemakers come to the realization of the importance of honoring interconnectedness, independent of geography, livelihood, or time.” Simon notes. “Ubuntu, an embodiment of the social fabric of sub-Saharan nations, states, ‘I am because we are. And since we are, I am’.”

The Sedona City Hall art rotation exhibits are located in the Council Chambers and in the gallery in the Vultee conference room on the campus at 102 Roadrunner Drive. To make an appointment for best viewing times call Nancy Lattanzi at 928-203-5078 or email NLattanzi@SedonaAZ.gov.