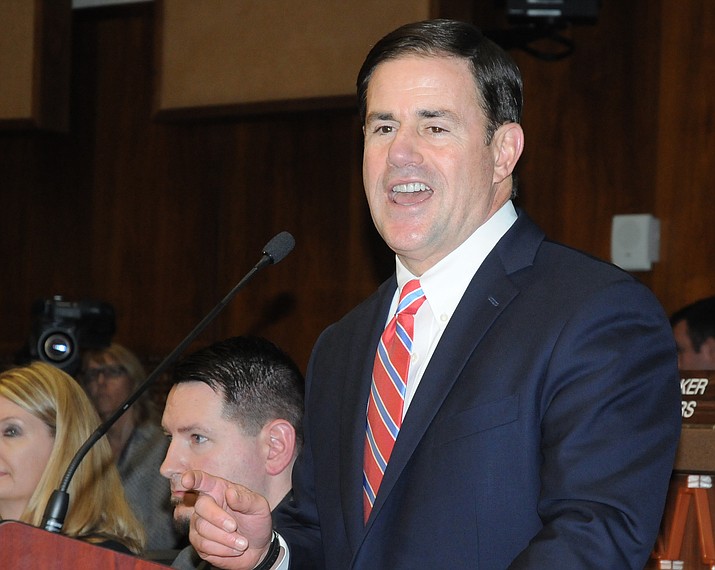 PHOENIX -- Undeterred by last year's defeat, Gov. Doug Ducey said Monday he will make another run at getting lawmakers to approve his school safety plan -- including a controversial provision to allow judges to take weapons away from people considered dangerous.

But at this point what he wants in the plan -- and the universal background checks he refuses to consider -- could again doom the proposal he said would help cut down on mass shootings to failure.

In his fifth State of the State address, Ducey repeated his plea to lawmakers to adopt a drought contingency plan ahead of the Jan. 31 deadline set the Bureau of Reclamation, at which point federal officials will decide had to allocate the dwindling water supply out of Lake Mead.

-Made a pitch for more career and technical education, saying that those classes that used to be called "shop'' are training people for jobs the state needs to fill;

-Said he wants to bolster the state's "rainy-day'' savings account from the current $450 million to $1 billion, a figure that would be about 10 percent of a normal state budget, to be prepared for the next financial downturn;

-Promised to make good on last year's plan to hike teacher pay an average of another 10 percent by 2020 on top of the current 10 percent, though there was no mention of pay hikes for counselors, bus drivers, custodians and others not included in the package.

Ducey also took a slap at regulatory boards that refuse to recognize professional licenses that people have earned in other states when the move here.

"And before those unelected boards feign outrage, let's remember: Workers don't lose their skills simply because they move to Arizona,'' he said, calling those board members "bullies.''

He also surprised lawmakers by telling them that the state once again owns the House and Senate buildings.

Facing a $3 billion shortfall in 2010, the state met some of that by selling off a package of state buildings for $1 billion in up-front cash from investors. Since then the state has been leasing the buildings from the current owners, with the state scheduled to take back possession in 2030.

What the governor did is more of a bit of public relations maneuver.

There was no additional cash paid out. Instead, with the debt now down below $800 million, the lenders agreed they no longer needed as many buildings as collateral.

Restructuring the debt does decrease what the state would owe between now and 2030 by about $109 million.

Potentially more significant from an image standpoint, the action also eliminates one area where Arizona became the butt of Daily Show jokes for selling off the buildings in which state legislators meet.

Out of his speech, what is most likely to create the most friction for the governor is his school safety plan.

The governor told lawmakers his starting point is the plan he offered last year, one he said was based on a study of the five deadliest school shootings of the past two decades. More to the point, he wanted to know what could be done to have prevented them in the first place

But one common element was the belief that some of the incidents might never have happened given that there were people who had observed the soon-to-become shooters and raised questions about their safety.

That led to the STOP plan, Severe Threat Order of Protection. It would set up a procedure to allow not just police but family members and others to seek a court order to have law enforcement take an individual's weapon while he or she is locked up for up to 21 days for a mental evaluation.

Senate Republicans approved the proposal last year, but only after removing provisions to allow family members, guidance counselors and school administrators to also refer to courts people they considered a danger to themselves or others.

But even with that change it proved too much. Eddie Farnsworth, then the chairman of the House Judiciary Committee, refused to even give the measure a hearing.

On Monday, Ducey said he's ready to go at it again -- including the STOP orders.

Farnsworth, now a state senator, said he remains skeptical that Ducey can craft a plan that protects the constitutional rights of gun owners.

He said, though, that's only part of the problem. The rest, said Farnsworth, is locking people up for mental evaluations based on someone's complaint.

"I think the intent's good,'' Farnsworth said. "I think we have to find a way to do it without violating the Constitution.''

Democrats, in general, have had no problem with STOP orders. But they remain adamant that any plan must have something else that Ducey has so far been unwilling to provide.

Federal law requires licensed firearms dealers to conduct background checks when a weapon is sold to ensure that the buyer is legally entitled to possess a gun. But those rules do not apply in person-to-person sales, including sales by individuals at gun shows.

Ducey, in his speech, said he is taking ideas from a gun-control group spearheaded by former Arizona Congresswoman Gabrielle Giffords. She was seriously wounded in a 2011 shooting spree in a Tucson grocery store parking lot that left six others dead.

But there was no mention of universal background checks during Ducey's approximately 40 minute speech despite that being a touchstone of what the Giffords group wants. And even after the speech, the governor sidestepped questions about closing what some have called the "gun-show loophole.''

That's what he proposed last year, with law enforcement agencies required to put more information into the database checked by gun dealers. But none of that extends the requirement to check to individual sellers.

One is more resources: Ducey said there will be funds to put a police officer in every school that wants one.

"We know when a police officer is around, it makes things safer,'' he said.

"We are committed to universal background checks,'' she said. And their votes will be needed if Republicans balk.