Changing of the guard at Yavapai Broadcasting 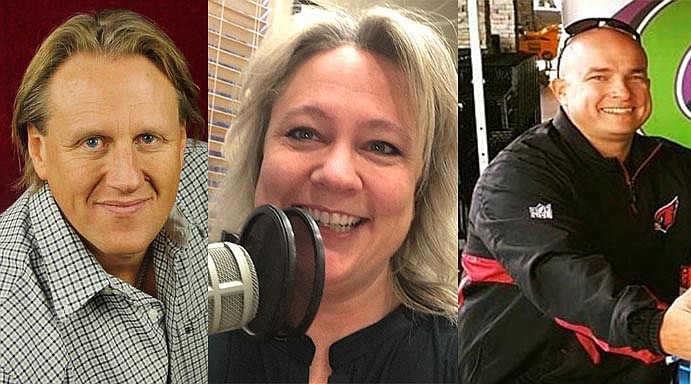 Malone wore many hats. Besides being operations manager for all Yavapai Broadcasting stations, he also was program director and the long-time “Morning Man” at AAA KVNA-FM.

Bryan James, program director of Top 40 KQST (The Q 102.9) will add the duties of operations manager for all six Yavapai Broadcasting radio stations. Bryan James started working at Yavapai Broadcasting almost 20 years ago when he was still in high school producing Mingus Union High School football games and helping with special weekend events. As the company grew, he took on more responsibilities. He started doing nights at The Q 102.9 and became the group’s production director. When the station’s PD retired, he moved into the PD position and started doing mornings. He’s never worked anywhere else in radio and considers it to be an honor to take on the role of operations manager.

Juli Page, program director of Classic Hits KKLD (95.9 The Cloud) adds the title of program director for AAA KVNA-FM. Juli was the wife of Rich Malone and is fully vested in his vision for the station. She does the midday show at KVNA-FM using the air name “Jules.” Juli grew up on Cleveland rock radio in the 70’s and 80’s as a faithful listener always hoping to catch her next new favorite song. She says, “I am grateful to work on a station that allows me to share my passion with our listeners and encourage community participation.”

Doug Brannson is new to the Yavapai Broadcasting staff. He joins as KVNA-FM music director and “Morning Man.” Doug grew up in Minneapolis in the late 80’s and early 90’s when the Alternative movement was just taking off. He’s a 25-year radio vet who worked in radio in the Midwest for most of his career until he decided to get out of the cold and move to Arizona.

Mike Puetz, Yavapai Broadcasting general manager, says, “After the loss of long time operations manager, program director and morning announcer Rich Malone, and with the guidance of our AAA consultant Dennis Constantine, I am very happy that Rich’s dream and direction for KVNA-FM, Northern Arizona’s Adult Alternative station, will be in the very capable hands of new program director Juli Page and new morning announcer and music director Doug Brannson. Both Juli and Doug have a tremendous amount of experience, and I look forward to working with them and listening to them as they guide KVNA-FM into the future.

KVNA-FM Program Director Juli Page says of her new role, “As the new program director of KVNA-FM, I’m pleased to be able to keep the station on course to reach the potential my husband Rich knew it had. I have been blessed with an amazing support crew — the award-winning programmer Dennis Constantine and our new addition, MD and Morning Host Doug Brannson.”

Doug Branson added, “I love the AAA format because it’s all about the music and the artists. I couldn’t have a better mentor that Dennis Constantine who knows more about the format than anyone. I give a lot of credit to the owners of Yavapai Broadcasting for supporting this format like they do.”