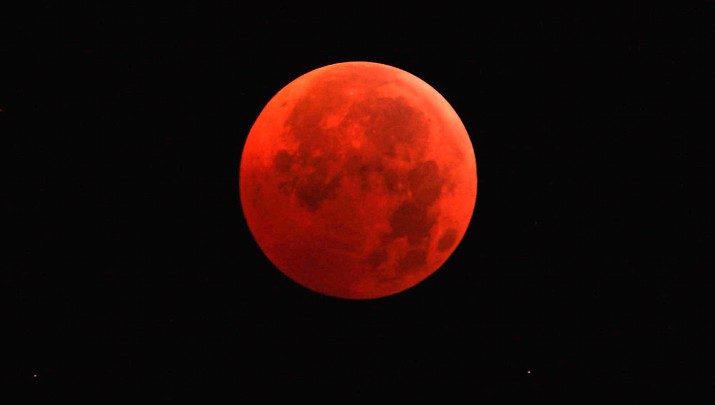 VERDE VALLEY – A lunar eclipse occurs when the Moon is positioned behind the Earth – and into its shadow.

From start to finish, Sunday’s lunar eclipse should last about five hours, according to figures released by NASA.

But to see the decade’s final total eclipse of the moon, all you need is one hour and two minutes.

What makes this weekend’s lunar eclipse special is what people are calling a super blood wolf moon.

The ‘super’ part means that the moon is closer to Earth than usual. ‘Blood’ refers to the red cast of the moon during the eclipse. And ‘wolf’ references the fact that the eclipse is taking place in January.

At 7:36 p.m. MST/Arizona time, the eclipse will be in its penumbral state, meaning a partial shadow of the Earth will be cast over the moon. At this point, the moon is not yet a dark red, but it is slightly dim.

According to timeanddate.com, a penumbral eclipse is “often mistaken for a normal full moon.”

Total eclipse will take place from 9:41 p.m. until 10:43 p.m., with maximum eclipse at 10:12 p.m. During the total eclipse, the moon appears at its darkest, a reddish-orange color.

According to AccuWeather Meteorologist Mike Doll, clouds are expected “over much of the western U.S., but there could be enough breaks in the clouds for people to see the eclipse.”

According to Accuweather.com, Sunday’s total lunar eclipse will be the first since Dec. 21, 2010 to be “visible in its entirety across the U.S.”

What happens if you miss the total lunar eclipse? No problem. The next time the Earth will shield sunlight from a full moon will be on May 26, 2021.

1 Spend your Sunday at Lowell Observatory for a total lunar eclipse after hours celebration.

From 8 p.m. until 11 p.m., view the lunar eclipse through the Clark Telescope. At 9 a.m., listen to an outdoor talk detailing the eclipse.

Cost is $30 per person. Viewing could depend on weather.

2 According to the NASA website, the lunar eclipse taught people that the Earth is round when they saw Earth’s shadow on the moon.

3 Before we first heard the terms ‘super moon’ and ‘blood moon,’ a Full Wolf Moon is simply the name bestowed upon January’s full moon. “In Native American and early Colonial times, the full moon for January was called the Full Wolf Moon. It appeared when wolves howled in hunger outside the villages,” according to https://www.almanac.com.

4 According to timeanddate.com, a solar eclipse “always occurs about two weeks before or after a lunar eclipse.”

Arizonans missed the Jan. 5-6 partial solar eclipse because – with this Sunday’s total lunar eclipse – it happened at night.

5 The United States was in a prime orbital position and time of day to view the eclipse on April 15, 2014.

Depending on local weather conditions, the public got a spectacular view looking into the sky as the moon’s appearance changed from bright orange to blood red to dark brown and perhaps gray.

The eclipse is a phenomenon that occurs when the Earth, moon and sun are in perfect alignment, blanketing the moon in the Earth’s shadow.

According to an April 2014 article in National Geographic Magazine, the Incans believed that the moon looked red during a lunar eclipse because a jaguar had eaten the Moon.

“The Incans also believed that once the jaguar finished eating the Moon, it could come down and devour all the animals on Earth, so they would take spears and shout at the Moon to keep it away,” the article stated.

Ancient Mesopotamians believed that a lunar eclipse was the result of seven demons attacking the Moon.

“This attack was more than just one on the Moon, however, for the Mesopotamians linked what happened in the sky with what happened on the land, and because the king of Mesopotamia represented the land, the seven demons were thought to be also attacking the king,” the April 2014 National Geographic article stated.

To protect their king, the Mesopotamians “made someone pretend to be the king” which would fool the demons into attacking the imposter.

Once the lunar eclipse had ended, the Mesopotamians would make the faux-king disappear “possibly by poisoning.”

In Chinese mythology, lunar eclipses occur because the dragon, a masculine solar energy, is attempting to eat the moon.

According to the lunar eclipse entry at lifeasmyth.com, the ancient Chinese would make “loud noises” such as banging a drum to “frighten the dragon away.”

As the story goes, the Chinese navy would fire its cannons during a lunar eclipse as recently as the 19th century because of this belief.