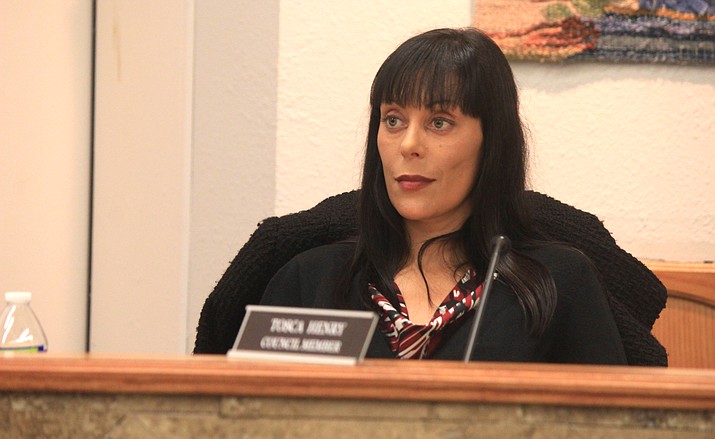 Cottonwood City Council appointed Tosca Henry to serve as vice mayor Tuesday. She was unanimously approved by her council peers.

Last year, Mayor Tim Elinski and then-Vice Mayor Ruben Jauregui voted in favor of Henry but Council Member Deb Althouse and former members Linda Norman and Karen Pfeifer voted “no,” citing concerns over her ability to commit time to community events with her busy schedule as an attorney.

“I want to say she’s stepped up,” she said. “I’ve seen (Henry) at a lot of events and proved us wrong that you can make time out of your very busy day. I’ve been very impressed. Council Member Henry has my full support.”

Henry thanked her council peers for their confidence.

“My one concern is the time aspect but I think we can make time for the events,” she said.

In an email to the Verde Independent, Henry said she was “honored” to have been selected by her council peers.

“This position, as with the other council seats, is all about service,” she said. “I recognize the time and work that is involved, and I plan to work hard and devote the time that is necessary. I learned a great deal from former vice mayor Kyla Allen’s involvement and community outreach, and hope to continue bringing the same to this role.”

“Two that were recently elected, and one who will be appointed to fill the vacancy created by Ms. Allen’s departure,” she said. “In today’s political environment, it is easy to be adverse, and not listen to, or respect, one another. I am not going to bring that to this role; I plan to work respectfully and collaboratively with Mayor Elinski and my fellow council members, and to continue building that bridge between council and the community.”

“I want to thank council for allowing me to be vice mayor this last year,” she said. “It’s been a great experience … because of the way people receive you.”

Allen announced she would be stepping down from the dais last week due to family issue and the fact that she would be moving outside city limits. Her last day on council was on Tuesday, Jan. 15.