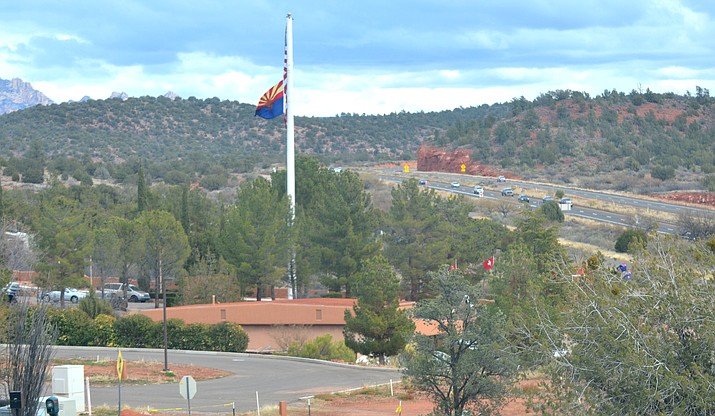 A new FirstNet cell tower will be located near this existing cell tower in the Sedona Pines retirement community. VVN Vyto Starinskas

COTTONWOOD -- A new cell tower will soon appear near Sedona Pines despite opposition from neighbors.

Wednesday, the Yavapai County Board of Supervisors approved plans to build an 80-foot-tall colocatable cell phone tower in the parking lot of the Sedona Pines Resort office and Bella Vita Restaurant along State Rout 89A.

The project is meant to help communication between first responders, according to staff. The Sedona Fire District submitted a letter to the county in support of the project.

Michael Campbell spoke at the meeting on behalf of the applicant said the project was part of the nationwide program, FirstNet

It was approved with several stipulations including using a pine disguise rather than a eucalyptus camouflage which was initially proposed.

Vice Chairman Craig Brown said he usually doesn’t approve cell towers but he was willing to support the one at Sedona Pines.

“Because we need coverage for first responders,” he said.

AT&T, the applicant for the project, was also granted a request to waive an ordinance requiring wireless facilities be built outside 1,000 feet of homes.

Last month, County Planning & Zoning voted to recommend the County Board of Supervisors approve the project. Kevin Osterman was the single nay-sayer. He cited issues with violating county zoning ordinances.

An application for a guest house was pulled from the agenda last minute. In December, P&Z voted unanimously to deny a use permit for a guest house on a property located at the Pine Valley subdivision in the Village of Oak Creek.