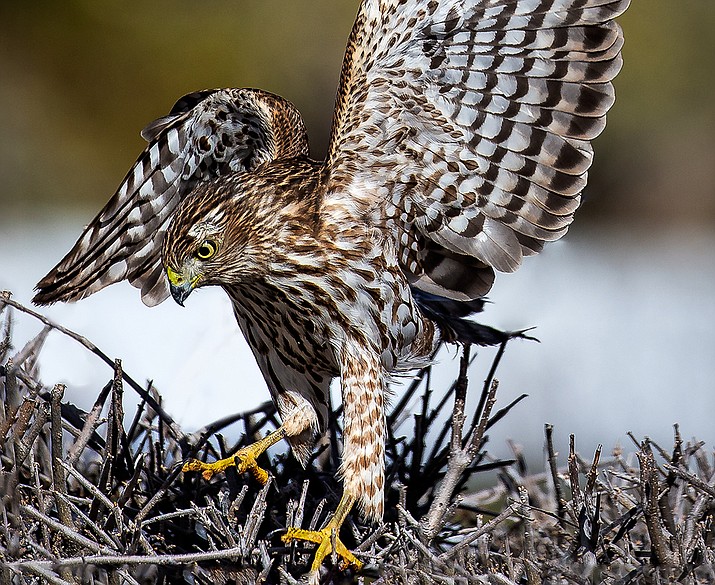 You are mine, at least that what this Coopers Hawk seems to be telling the birds hiding and seeking shelter in our Desert Olive bush, which after 20 plus years of trimming is a nearly impenetrable mass of interwoven branches. Ultimately our friend flew away unsatisfied and the fortunate tweety birds that sought refuge in the bush lived to see another day. Perhaps the next day they were not so lucky and the Coopers Hawk got the meal which he needed to sustain himself too. I was fortunate to have him spend several minutes trying to get the birds within to flee or penetrate the bush sufficiently to sink his talons into one of them … and to have a camera that shoots 12 frames a second in raw mode. Think I need to start feeding the little ones again so that I can attract my predator friends again.

It was very cool and windy today … a good day to spend learning InDesign, another of the Adobe Suite and which is the premier application for producing books and other documents and publications. Mercifully there is a lot of overlap and integration with the other Apps in the suite and the learning curve seems not all that high. I have been trying to do my book in Word for the past year or longer and I was going nowhere very fast with it … it was a great app for the law office, but not so much for publishing.

A friend stopped by Saturday with a copy of her new book and she explained the basics of InDesign and producing books and such with it. Thank you Carol, and if anyone would like to read a very beautiful book, both in content and appearance you should buy a copy of her new book, “At The End of O Street”, by Carol Haralson … check it out at: https://www.amazon.com/Far-End-Street-Carol-Haralson/dp/0692154329/ref=sr_1_5?keywords=at+the+end+of+O+street&qid=1548141811&s=Books&sr=1-5-catcorr

So, I am thinking that I will have my book done by summer as I already have a great deal of the text written and have pulled all the photographs I am using in it. InDesign is making a lot of sense to me and have already finished the first ten pages and now working on placing all the photographs in it and then the writing to accompany each photograph. In many respects the book will be similar to my nightly missives, but they will not be time dated or sensitive. Current title is “Just A Moment” and the approximately 80 photographs will tell a story from less than a total of one half of one second of time. The photo in tonight’s photograph has frozen exactly 1/4000th of a second … the intensity and beauty of this predator will be with us for years and years … photography is a way to capture the beauty, preserve and share it while telling the story of that brief moment … and there are a bunch of kids learning all about it now too, thanks to many of you.

Have an absolutely beautiful day today and look around you for those things that will stay with you for a lifetime … or at least the day, and smile, we are blessed!

… after the day’s struggle, there is no freedom like unfettered thoughts,

no sound like the music of silence. And though behind you lies a road of dust and heat,

and before you the fear of untried paths, in this brief hour you are master of all highways,

and the universe nestles in your soul. Therefore, in the night, sit a while and dream awake,

ere you lie down to sleep.