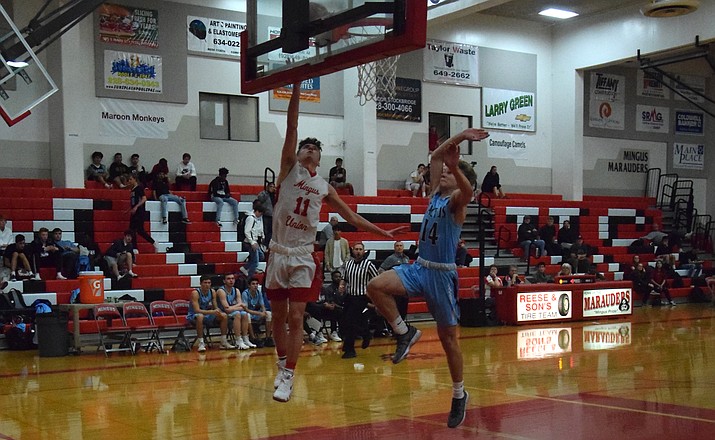 Mingus senior Chase Saczalski lays the ball up during the Marauders’ 58-55 win over Cactus on Tuesday night at home. VVN/James Kelley

“It was not our best game (laughs), it was pretty ugly,” Mingus head coach Dave Beery said. “I mean they had a couple of their better players out, which I think if they had them they would probably beat us by quite a bit. We didn’t come ready to play (Tuesday) night. So it was frustrating in that regard.”

The Marauders led the whole game until losing their lead at the end of the third quarter and trailing by four points late in the game.

“They had the momentum,” Beery said. “We didn’t have any spark, if you want to call it that (Tuesday) night and so they definitely had the momentum, they had the lead, they were up four and were taking their time on offense and you could tell our guys got a little nervous there but I just kept telling them there’s a lot of time left, one play at a time and I think we did enough but we got a huge amount of space for improvement, which is good, stuff to work on, so in that regard it’s good that we escaped with a win I guess and it’s good that we have some things to focus on but we got to be ready to compete when we step on the floor.”

“Chaz, Chase, Colton Sorensen, those guys hit some huge free throws,” Beery said. “I was really happy for Chase because he was kinda bit by a little bit of a free throw bug. He’s got great form but he just hasn’t shot free throw particularly well this year but he’s a kid that’s a competitor. He just went up and made that look pretty easy. It’s big, Colton Sorensen again, he’s hit a couple big free throws for us a couple different times this season, so it’s good to see him. Chaz has been pretty close to perfect at the line at the end of games this year.” 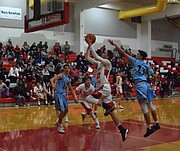 Mingus senior Colton Sorensen drives to the basket during the Marauders’ 58-55 win over Cactus on Tuesday night at home. VVN/James Kelley

“Overall this semester I think we’ve played pretty well,” Beery said. “We lost to Lee Williams, that’s been our lone loss in 2019 and that’s a darn good basketball team. (LW head coach) Cain Atkinson has them playing hard and playing well and they really execute. They’re very, very physical and really if I was going to design a team for us to struggle against it’s Lee Williams, we don’t match up well. The kids are working hard, we’ve had great practices.”

Mingus Union’s next game is Friday at No. 22 Bradshaw Mountain. Their next home game is Tuesday night at 7 p.m. against No. 28 Coconino.

The Marauders are a half game behind first place Lee Williams, who is 6-2 in Grand Canyon play.