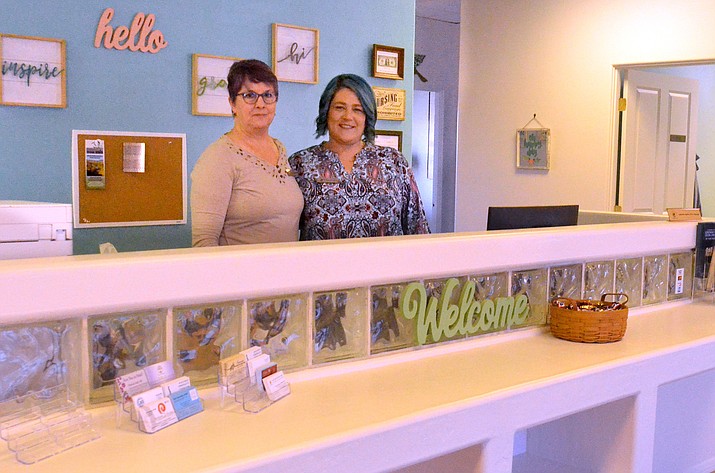 COTTONWOOD -- A nurse practitioner has opened a new primary care medical office in Cottonwood that only takes cash, credit cards and checks -- but no health insurance.

Instead, Sanctuary Cove Healthcare charges a flat $55 for anyone between 11 and 59 years old for an initial office visit and $45 for anyone 60 or older.

The office is a two-woman show. Buchanan wants to build a “family” of patients from the Verde Valley. Her only other employee right now is Office Manager Samantha Moody.

The offices on Cove Parkway have been renovated by Buchanan. She said he won’t be paying herself for a while to pay off the costs of opening the business.

“My issue is getting the word out,” explained Buchanan, who said they had a “soft opening” earlier this month, but will have their grand opening on Feb 2.

After coming to Arizona in 2016, she worked for a year at the Cottonwood Primary Care at Northern Arizona Healthcare and then almost a year with a rehabilitation and detox facility in Prescott.

Buchanan, who now lives in Cottonwood with her husband, said she will work with patients on a sliding-fee scale if they have financial problems.

Buchanan is certified in family medicine and psychiatric mental health, she said, and can also assist in medication-assisted treatments for opioid addiction and other problems.

Patients can walk in and be seen right away or make an appointment, she said, adding that they do sports physicals, college physicals, woman’s health visits and behavioral health treatments for a set fee.

Buchanan said she opened the practice in Cottonwood because “she lives here” and is “five minutes away.” She said patients will have her cell number to call her in emergencies and she will meet them when needed.

“I want the independence. I want affordable health care. We are a cash-pay practice, but we work with people who are uninsured and insured,” she said pointing out that some co-pays are as much as her office visit and people with health savings accounts can pay for her services with their health savings account credit cards.

Buchanan said she can prescribe meds and refers patients to specialists, but patients will have to pay the pharmacy and specialists directly through their own insurance or other means such as cash.

Buchanan has set her own rates for other services other than routine services, such as physicals, women’s health and behavioral health.

Compared to other insurances and other medical providers, Buchanan says her fees are very reasonable and “you never get a bill” later. She was referring to high deductibles and co-pays that bill a patient after going through the insurance process.

She knows people who can’t afford health care who are self-employed or employed at low-paying jobs who need low-cost medical services. “If there is an issue, I can negotiate a price with a person where you could not do that with a big company.”

“I take walk-ins. We try to be more service-orientated, patient centered, kind of a family,” she added.