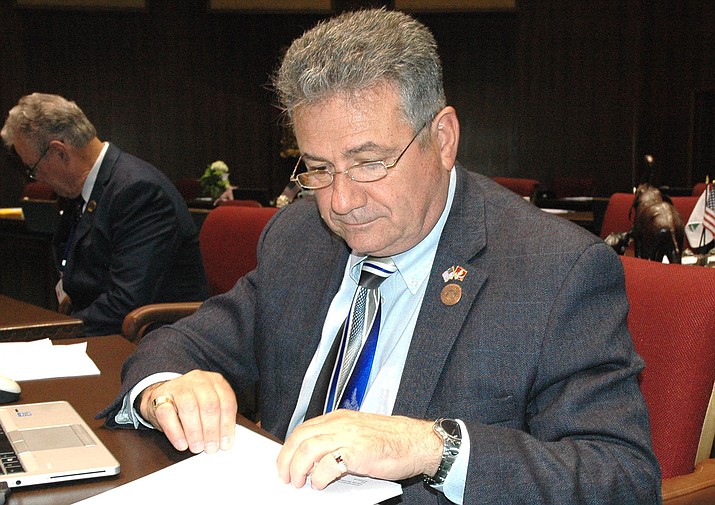 The proposal by Sen. Sonny Borrelli would have the currently one-year certifications for medical marijuana cards extended to two years.

That would eliminate not only the need for the expense of an annual trip to the doctor but also paying a second-year annual fee to the state.

And that annual renewal fee after that would be cut in by two thirds, to just $50.

The move comes as records obtained by Capitol Media Services show the state has nearly $55 million in an account from fees from cardholders and dispensary owners. And it’s growing by more than $14 million a year as the money collected can be spent only on issues related to medical marijuana.

SB 1138 also would accomplish what some patients have been unable to do by suing the state: Reduce the fees.

Borelli said he sees his measure as streamlining government.

“It would relieve the burden on the Department of Health,’’ he said.

“They have such a short time in getting these cards in and out,’’ Borrelli said. “So, for processing, why not have the card go for two years?’’

A two-year card also means fewer trips to the doctor, as each renewal application requires a recommendation by a physician that the person has one of the conditions for which medical marijuana can legally be used.

These range from glaucoma and AIDS to post-traumatic stress disorder and cancer, though the most frequent condition cited by those seeking the legal use of marijuana is severe and chronic pain.

Borrelli figures it could cost $300 just to get the required recommendation.

“I see no reason why the cards shouldn’t be two years,’’ he said.

And there’s something else. While his legislation leaves it to the health department to determine the initial fee, currently $150, it spells out that, beginning with renewals in the third year, the agency could charge just $50.

Borrelli’s bill, if signed into law, would finally provide the kind of financial relief that medical marijuana users have been unable to get from the courts.

Several users filed suit in 2016 charging that the Department of Health was acting illegally in continuing to collect far more in fees than needed to administer the 2010 voter-approved law which allows those with certain medical conditions to obtain a state card to purchase up to 2 1/2 ounces of marijuana every two weeks. Attorneys sought an order to have the fees reduced to simply the cost of operating the program.

Maricopa County Superior Court did not dispute that the agency is collecting more money from medical marijuana users than it needs to administer the program.

But Gentry said the only thing spelled out in the 2010 law is that the health department must collect sufficient fees to cover the cost of the program. She said there is nothing in the law that prohibits it from taking in more than needed.

More to the point, the judge said the lawsuit essentially asks her to decide what’s an appropriate fee and reset it at a more reasonable level. And that, Gentry said, is something that courts are in no position to do.

Her ruling was upheld by the state Court of Appeals.

Borrelli has another bill which also could reduce the amount of money accumulating at the health department, at least a bit.

SB 1137 would give the state Department of Agriculture $2 million to begin testing the marijuana sold at state-licensed dispensaries. That agency would be responsible for determining that only pesticides considered to be so low risk that they are exempt from federal regulation can be used on the plants being grown for medical use.

Borrelli attempted to push through a more comprehensive testing scheme last year, including requirements for disclosure of all chemicals to buyers, but that never became law.