Rep. Stringer responds to 1983 accusations of sex-related crimes and child pornography
"I have never been convicted of a crime” 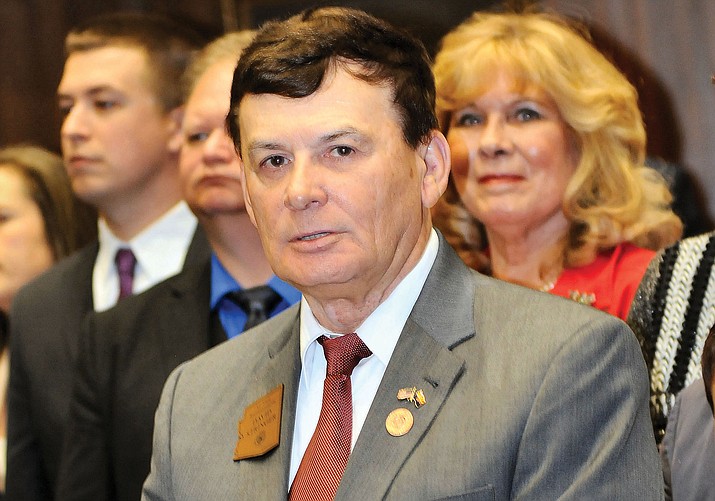 PHOENIX -- State Rep. David Stringer acknowledged Friday he had been arrested decades ago on multiple sex-related charges but insisted he has “no criminal record’’ despite a plea deal.

And he said it was wrong of a Phoenix newspaper to use information from Maryland criminal records that were supposed to have been sealed.

New Times reported that Stringer, then working in Washington, D.C., had been charged with five sex-related offenses in 1983 while living in Baltimore. One of those charges according to the copies of documents the paper placed online was child pornography.

The paper reported he eventually pleaded guilty to three — Stringer’s account has two — with a deal that would result in the records being erased if he successfully completed probation.

“I have never been convicted of a crime,’’ he told Capitol Media Services. “The case was expunged 29 years ago.’’

Stringer declined to go into detail about why he agreed to plead guilty.

“I have no records,’’ he said. “It would be irresponsible to try to comment on allegations from 35 years ago for which I was not convicted and which have been expunged.’’

And Stringer said that, as he remains a member of the Maryland Bar which regulates attorneys, “it might be illegal’’ for him to provide details of sealed and expunged records.

Instead, he referred to a separate article published in the Arizona Daily Independent, before the New Times article was published, saying it “looks reasonably fair and accurate.’’ But Stringer denied being the source of that information even though it quotes him directly.

According to that paper, police came to his house with a search warrant accusing him of possessing pornography and patronizing prostitutes.

Stringer, the article said, had no pornography but that the other charges came from prostitutes who, already arrested, offering up names of clients — including, they said, Stringer.

Eventually prosecutors offered him something called “probation before judgment’’ on two misdemeanors. That is not a conviction, with the records expunged after the probationary period ended, a probation that required him to perform 208 hours of community service a year.

And that, in turn, saved his government job and his legal career.

House Speaker Rusty Bowers, who had previously disciplined Stringer for remarks made last year about race and immigration, said he spoke with the Prescott Republican and “expressed my deep concern with the article and its implications.’’

Bowers acknowledged that Stringer may have the charges expunged. But he said that doesn’t end the matter.

“Rep. Stringer may have fulfilled the legal consequences of his actions, but I believe that charges of this nature cast a shadow over the entire Legislature and his ability to be an effective legislator,’’ the speaker said in a prepared statement. Bowers also said there are “myriad calls’’ for Stringer to resign, along with other actions to be taken against the second-term lawmaker.

One of those has been discussions Rep. Reginald Bolding, D-Laveen, has had with legislators from both parties, even before the latest disclosures, about a possible censure of Stringer for the comments he made last year. But now, Bolding told Capitol Media Services on Friday, that seems inadequate.

“We’re calling for him to resign,’’ he said of House Democrats.

“We think in light of the new news story there is just so much distraction that is now plaguing the state Legislature, there’s so much stuff that’s hanging over his head, I don’t know how he can represent his constituents,’’ Bolding said. “We need to push forward.’’

Support for him also is crumbling among fellow Republicans.

“I believe at this point it is proper for Rep. Stringer to step down from his position in the House,’’ said Rep. Kelly Townsend, R-Mesa. “The reputation of our institution must remain intact, and the cumulative and escalating nature of the recent unfortunate events places that in jeopardy.’’

Townsend also said she intends to file a complaint with the Ethics Committee on Monday.

An aide to Gov. Doug Ducey pointed out that he had called for Stringer to resign last year in the wake of his comments about race and immigration.

“The governor has been clear on this,’’ said Elizabeth Berry. “Today, he reiterated that call.’’

There was no immediate response from Jonathan Lines, the chairman of the Arizona Republican Party, who also had asked Stringer to resign last year.

But Senate President Karen Fann, who represents the same district as Stringer, told Capitol Media Services she did not believe he could be an effective representative for the area.

The new disclosure comes just a day after Stringer publicly apologized on the House floor for making those comments, which included saying that non-European immigrants do not blend in, including African-Americans whose ancestors were brought here as slaves, and that immigration poses an “existential threat’’ to the United States. But he did not rescind any of those comments.

Those and other comments are what resulted late last year in Bowers abolishing what was to be a new committee on criminal justice and sentencing reform that Stringer had asked to create and chair.

Editor’s Note - Requests to Stringer for additional comments were unsuccessful.